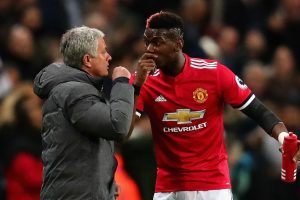 Paul Pogba has taken aim at Jose Mourinho in his new documentary as more Manchester United carnage is unveiled by the Frenchman.

A new Amazon Prime documentary titled The Pogmentary is set to be released that will focus on Pogba and lift the lid on his six years at Old Trafford. The 29-year-old is set to leave United for free this summer when his contract expires at the end of June, having joined the club for a then world record fee of £94.5million in 2016.

The Athletic report that Pogba takes aim at the manager that signed him for United during the documentary.

The report reveals that Pogba "points the finger" at Mourinho when explaining why he struggled for form during his time at United. It was Mourinho that signed him for the Red Devils from Juventus.

Pogba made 108 appearances under Mourinho, scoring 20 goals and adding 22 assists. He also won the Europa League and the League Cup in his first season back at United, the only silverware he won during his second spell with the club.

The documentary also sees Pogba scoff that United "offered him nothing" during their attempts to tie him down to a new contract and avoid losing him for free.

Did Paul Pogba under-perform for Manchester United? Let us know in the comments section below

During the penultimate scene of the documentary, the French midfielder is seen speaking to his late-agent Mino Raiola and asks: "Did Manchester [United] make a second offer?"

Raiola responds by explaining: "Yes. They absolutely want you to stay. For me, the offer doesn't reflect that. I told them, 'If you want him to stay, don't make that offer'. I will make them understand that if they really want you to stay and they want to build a project around you, this time they have to act differently and put the money on the table."

Daily Star Sportexclusively revealed last summer that Pogba had rejected an offer of £350,000-per-week from the club. Only David de Gea and Cristiano Ronaldo are better paid by United.