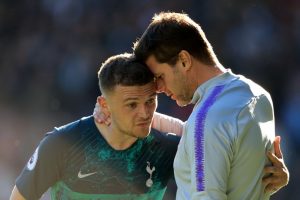 The United board are growing in confidence over the appointment of the current PSG boss as talks are in place about paying the £10m compensation package to the Ligue 1 club to free him from his contract.

And now it seems Pochettino's move to Manchester has taken a giant leap forward.

Spanish Outlet La Razon is reporting the former Tottenham manager is already enquiring about the Red Devils' January recruitment and he wants to shore up their leaky backline once and for all.

Trippier, of course, is no stranger to Pochettino having played under him at Spurs.

The England international was a regular at White Hart Lane and was a crucial figure in helping Tottenham reach the 2019 Champions League final.

If appointed, Pochettino is eager to rekindle their relationship at Man Utd with the flying full-back entering the final 18 months of his contract in the Spanish capital.

Where do Manchester United need to strengthen in January? Let us know in the comments section.

But such a worry is United's defence that Pochettino also wants to acquire another top centre-back in Jules Kounde.

The Frenchman missed out on a move to Chelsea in the summer as Sevilla were unwilling to reduce their asking price.

And the €70m (£59m) valuation could have a similar result this time around.

The report states the Frenchman will not be affordable to United at his current price.

The club did not hold back in splashing the cash over the summer with Jadon Sancho, Raphael Varane and Cristiano Ronaldo totalling over £140m.

Consequently, Pochettino may have some wheeling and dealing to do in January.