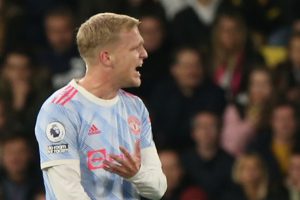 But if the Red Devils were able to coax top targetParis Saint-Germain manager Mauricio Pochettino over to the red half of Manchester, then there is every reason the Dutchman could be brought to centre stage.

In what was a somewhat poetic ending, van de Beek scored the final goal of Solskjaer’s reign, tapping in Cristiano Ronaldo’s cushioned header during United’s 4-1 away loss to Watford.

The 24-year-old has only played 60 Premier League minutes for United this season.

But if previous comments are to be considered, then van de Beek could very well be a huge part of Pochettino’s plans at United, if the Reds are able to persuade the former Tottenham Hotspur manager to replace the sacked Solskjaer.

Quotes dating back to Tottenham’s Champions League semi-final tussle with Erik ten Hag’s vibrant Ajax side saw the Argentinian boss single out Van de Beek above the rest of his colleagues at the time.

“Logically, I love De Jong and De Ligt. But the example of the operation of this Ajax is Van de Beek,” Pochettino said to El Pais.

“I like very much. They have a young player, from the academy, in each line, that shows what the team is.”

Who do you think will be the next permanent Manchester United manager? Comment below

Van de Beek’s £35m move to Old Trafford and the lack of playing time was a real mystery.

His initial arrival was a huge surprise as United already had the likes of Paul Pogba and Bruno Fernandes in their attacking midfield ranks and did not appear to need another advanced playmaker.

And when United’s form began to plummet, former Red Gary Neville said he had been scratching his head over the Dutchman’s predicament.

“Why’s Donny van de Beek not being given a chance?” Neville told the Metro after United’s 4-2 loss to Leicester.

“There’s something about that.

“He’s not been given a chance for 18 months so you’ve got to come to the conclusion that Ole didn’t sign him or he doesn’t fancy him.”

Former midfielder Michael Carrick will take temporary charge of the Red Devils, who have travelled to Spain to face Villarreal in a crucial Champions League group match.