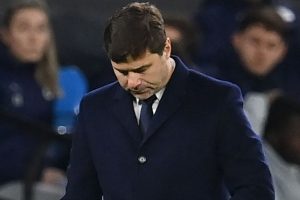 Mauricio Pochettino will be hoping for happier days in Manchester in the future.

But if he can't beat Manchester City with Lionel Messi, Neymar and Kylian Mbappe at his disposal, how the heck will he do so with those players he wants to inherit at United?

Should Pochettino go on to become the next permanent boss of United, his task will be to dethrone his "noisy" neighbours as the kings of English football.

He will have quite a job on his hands.

And if he wanted to put down a marker at the Etihad last night for what might be to come in the future, the Argentine badly missed the target.

From start to finish his expensively assembled side of superstars were schooled by Pep Guardiola's men in this crunch Champions League, Group A showdown.

PSG might have taken the lead on 49 minutes through Kylian Mbappe as the visitors threatened to produce one of the greatest smash and grab raids in recent history.

But the class of City told in the end as goals from Raheem Sterling and substitute Gabriel Jesus guaranteed top spot for Guardiola's men and a place in the knockout stages.

Do you think Manchester United should hire Mauricio Pochettino? Let us know in the comments section below.

But if these two billionaire rivals happen to meet again further down the line then on this evidence, only a fool would back the French outfit to come out on top.

City dominated from the start when Rodri looped a header back across goal, forcing Presnel Kimpembe to clear it from underneath his own crossbar.

Achraf Hakimi then had to do something similar to deflect Riyad Mahrez's curling strike over the top, before Ilkay Gundogan flashed a glancing header wide as Guardiola's men continued to create the better chances.

Apart from Messi nutmegging Sterling with his first touch, there had been little from PSG to brag about.

Ander Herrera almost turned Bernardo Silva's cross into his own goal and Keylor Navas produced a great save to tip wide Riyad Mahrez's curling effort as PSG continued to ride their luck.

It was turning into an embarrassing onslaught for the French outfit, with Pochettino stood on the sidelines watching Messi and Neymar resemble two icons who couldn't give a hoot about the outcome.

There was more chance of home fans not booing the Champions League anthem than there was of the PSG pair doing some defending – and Pochettino seemed unwilling or unable to do much about it.

But one mistake against this lot is all it takes and when John Stones made one on the stroke of half time, he was relieved to see Mbappe race clear on goal then fail to hit the target.

But the warning shot had been fired and City were not so fortunate four minutes into the second half, when PSG broke the stalemate to leave the Etihad in silence.

Inevitably Messi was at the heart of the build up, combining with Neymar before picking out Mbappe in acres of space at the far post.

At this stage the outcome feels inevitable and it was, as Mbappe drilled a shot through the legs of Ederson to make it 0-1 to the visitors.

But the lead lasted barely ten minutes before City hit back, with Kyle Walker charging onto Gundogan's clever pass before finding Sterling, who bundled the ball home from close range to level matters before Jesus gave his side the win they deserved.