Premier League managers and captains will be warned in pre-season that players who make the VAR hand gesture to officials will receive yellow cards.

The Premier League is set to introduce VAR next season, but refereeing bosses are determined that officials are not put under undue pressure by players to check decisions.

The officials noted during the World Cup in Russia last year that huddles of players surrounded the referee and demanded video checks be made after controversial moments in games. 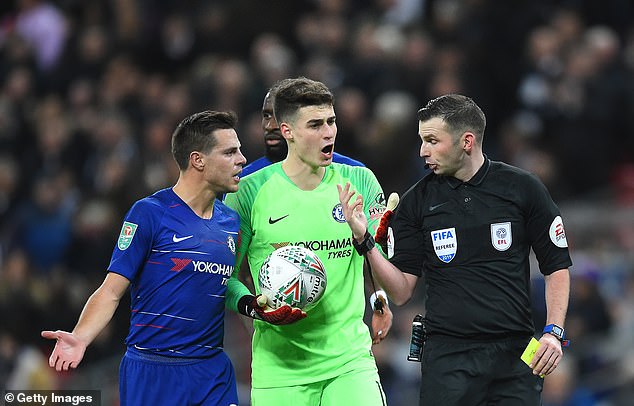 However, the experts at the West London VAR base will continually be checking decisions, even without being asked to do so by the on-field officials.

As such, if a match referee has missed a call, it will be brought to his attention by a video assistant via his earpiece.

As a result, there is no need for players to demand video reviews from the officials and those players who make a television screen gesture with their hands will be cautioned for dissent and attempting to influence the officials. 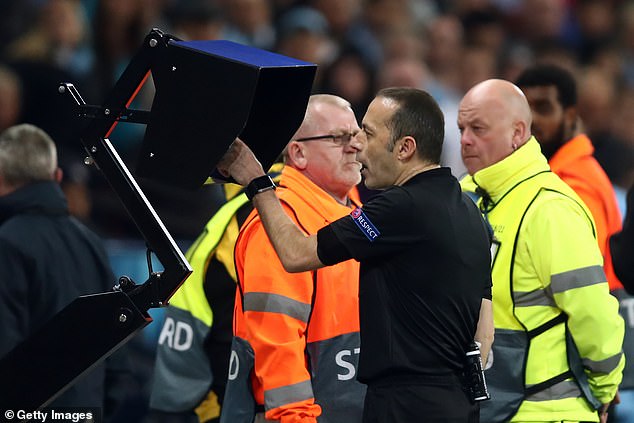 The referees wanted VAR to be introduced to strengthen their credibility on the field and are determined that the possibility of a video replay is not used by players to undermine their authority.

Managers will also be reprimanded if they make the same gestures to fourth officials.

Premier League managers and captains are due to have a pre-season meeting at Stockley Park later this summer, where this message will be reinforced, and officials will be expected to put the directive into practice when the season kicks off in August.

HOW VAR WILL WORK

VAR will be used in all 380 Premier League matches next season.

The Video Assistant Referees will review all goals scored as well as potential red-card challenges, penalties and cases of mistaken identity.

Here’s how it will work, using the example of a tackle by Huddersfield defender Zanka on Crystal Palace forward Wilfried Zaha from earlier this season.

Step 1: Zanka stretches for the ball but catches Zaha on the ankle as he sprints past. Zaha goes down, clutching his foot. Referee Lee Mason awards a foul and shows Zanka a yellow card.

Step 2: VAR informs the on-field referee that they want to review the tackle for a possible red-card offence.

Step 3: The VAR watches the incident back in full speed first to assess the intensity of the tackle from as many available angles as they wish.

Step 4: Only once the intensity has been established, will the VAR review the tackle in slow motion to determine the point of contact.

Step 5: VAR assesses whether the referee made a ‘clear and obvious error’ in showing Zanka yellow card. This is the crucial decision.

Step 6: If the VAR thinks he has, they will inform Mason that he should rescind the yellow card and show Zanka a red card instead. If not, they will say ‘check complete’.