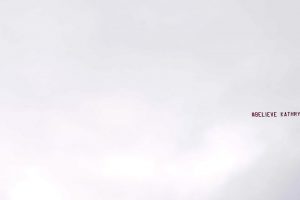 A plane with the name of a woman who accused Manchester United ace Cristiano Ronaldo of rape has been flown over Old Trafford.

Ronaldo was making his second United debut as the Red Devils took on Newcastle with the Portugal star scoring in the first half.

Kathryn Mayorga said she was assaulted by Ronaldo at a Las Vegas hotel in 2009 with US prosecutors saying Ronaldo, who denied the claims, would not face charges in 2009.

A plane with the banner "Believe Kathryn Mayorga" was flown over Old Trafford on Saturday afternoon with a feminist group saying they wanted to remind crowds of the allegations.

Level Up posted on social media: "Manchester United has welcomed Ronaldo like a hero, and created a culture of silence about the rape allegations made against him. That ends today.

"We flew a plane over the game to say: #BelieveKathrynMayorga."

Ms Mayorga reportedly reached an out-of-court settlement with Ronaldo in 2010, involving a £270,000 payment for agreeing never to publicise the allegations.

Ronaldo's lawyers have previously said: “This agreement is by no means a confession of guilt.

“What happened was simply that Cristiano Ronaldo merely followed the advice of his advisors in order to put an end to the outrageous accusations made against him, in order precisely to avoid attempts, such as those we are now witnessing, to destroy a reputation built thanks to hard work, athletic ability and behavioural correction.”

Las Vegas Police did re-investigate the alleged 'sexual assault' in 2018 and in January 2019 they requested a DNA sample from the footballer, and six months later they concluded Ronaldo would not face any criminal charges.

“Based on a review of the information presented at this time, the allegations of sexual assault against Cristiano Ronaldo cannot be proven beyond a reasonable doubt,” said the Clark County District Attorney’s office. “Therefore, no charges will be forthcoming.”

Ronaldo has not denied he met Ms Mayorga though said the encounter was consensual.

In 2018, he tweeted: "I firmly deny the accusations being issued against me. Rape is an abominable crime that goes against everything that I am and believe in."