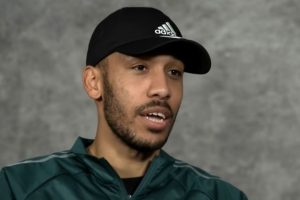 Pierre-Emerick Aubameyang has laughed off Jamie Redknapp's claim that he is "past it" after his match-winning display against Benfica.

The Arsenal captain scored the opening goal and the winner in the 3-2 victory on Thursday evening which sent his side through to the Europa League last 16.

Aubemayang's excellent outing against Benfica was in stark contrast to his ineffectual performance in the 1-0 defeat by Manchester City on Sunday.

Former England midfielder Redknapp delivered a hugely scathing verdict on the Gabonese ace after the Premier League clash, telling Sky Sports : "When I watch him sometimes, it's like he's lost his superpower.

Redknapp's criticism certainly caused a stir among Arsenal fans and one of them sent a screenshot of the article to Aubameyang on Instagram.

The supporter wrote: "The best answer is on the pitch, Auba. Their hate is our fuel."

Aubameyang shared the message from his fan on his own Instagram story and added a crying-laughing emoji after netting his double against Benfica.

Redknapp's criticism clearly has not rattled the 31-year-old, who received the backing of his manager, Mikel Arteta, earlier this week.

"I don’t know I didn’t see those comments I heard about them," said Arteta when quizzed on Redknapp's remarks.

Have Aubameyang's performances been good enough this season? Have your say in the comments.

"I'm here to support every single player in the squad in the squad and all the time give them the best possible advice.

"Play them in their qualities and when they have difficult stay right behind them. That’s what we’ve tried with Auba."

After a slow start to the season, Aubameyang has cemented himself as Arsenal's top scorer this season with 13 goals in 26 games.