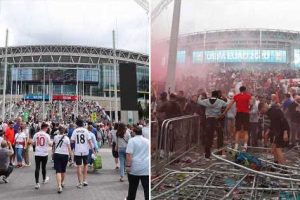 Pictures contrasting the scenes outside of Wembley from the men’s and women’s finals have gone viral.

The stadium, situated in north London, played host to the showpiece finales of the Euro 2022 tournament, when England’s men took on Italy, and then women’s.

The hosting of the final in 2021 caused great controversy as there were issues with the amount of carnage on the streets before the match, while some supporters tried to gatecrash the match. It’s a huge contrast in the final between the England and Germany women teams, with a picture showing the crowd outside the ground being calm.

The image beside has a broken rail, with one man jumping on top of it, while a large amount of litter can be seen scattered on the floor. Behind this stands a huge group of fervent supporters, with a red flare clouding the entire frame.

Fans have reacted to the viral comparison online. One wrote: “This wasn’t the mock that some people are taking it as. Quite the opposite.” Another sarcastically replied: “Yeah man, imagine I take my 5 year old to be football to watch a once-in-a-lifetime experience and she gets to see geezers p***** out there nut smashing stuff up and fighting. What footballs all about yeah.”

A third wrote: “His actually does the opposite of what he is trying to do and makes women's football look much better, the picture on the right looks horrible.” A last one wrote: “The final of the men's euro – actually being broadcast. The final of the women's euro – an ad on repeat due to technical difficulties. The technical difficulty being they don't invest in the women's game at the same the level as the mens.”

It comes after England fans expressed their frustration online that Alessia Russo was left on the bench. The backheel hero has been in sensational form and some felt that her goal in the Euros semi-final was deserving of her being selected for the first XI for the match against Germany.

Some Lionesses fans took to online to vent their frustrations at her being left on the bench once more by coach Sarina Wiegman. One raged: “@alessiarusso7 has to start for England today. Can't always rely on her coming off the bench and scoring goals.”

Another said: “What more could @alessiarusso7 done to have earned a start in this tournament #Lionesses.”