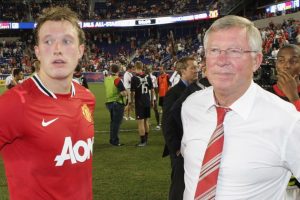 "Jones, arguably the way he is looking, could be our best ever player.”

Sir Alex Ferguson was certainly not stingy in his praise of Phil Jones’s potential when asked about the young defender in 2013.

“I think Jones may be one of the best players we have ever had, not matter where we play him,” the Manchester United boss continued. “At 21 years of age, he is going to be a phenomenal player. I think he can play anywhere on the pitch.”

Eight years on, it is hard not to afford a slight chuckle at the comments with the benefit of hindsight.

Jones has not featured for Manchester United for 15 months due to injury problems that have blighted his whole career and even when he has played, calamities have not been far away.

Instead of his football ability, it is his comical facial expressions that he is most known for and he has become a prime target for internet memes.

Jones may look back on his time at Old Trafford and think: what went wrong? To answer that we must go back a decade to when United spent £16.5million on the centre-back when he was 19 years old.

Jones had come through the academy at Blackburn Rovers and broke into the first team in the 2009/10 season. He made his Premier League debut against Chelsea just a month after turning 18 and earned plaudits for a solid and commanding performance.

He caught the eye of Sir Alex Ferguson in Manchester United’s 7-1 win over Blackburn in November 2010. As the scoreline would suggest, this wasn’t necessarily for his defensive display, but rather the way he took on a leadership role and guided his more experienced teammates. Jones was also deployed in a holding midfield role, showing his versatility.

Ferguson was impressed again when United drew 1-1 at Ewood Park on the final day of the season. Liverpool and Arsenal had also made their interest in Jones known by this point too.

While the Scot was keen to let the youngster develop at Blackburn for another season, he did not want to lose out to his rivals. Jones was brought to Old Trafford, via an invitation to Ferguson’s holiday retreat in the south of France.

Nemanja Vidic, Rio Ferdinand, Jonny Evans and Chris Smalling were all ahead of the teenager in the centre-back pecking order at the time and it was thought he might struggle for gametime.

However, Jones was mostly used at right-back or in midfield and clocked up 41 appearances in his debut campaign in red.

Jones was part of United’s title-winning side of 2012/13, during which time Ferguson made that ill-fated prediction, but he missed the first three months of the campaign with a knee injury and was later sidelined for one month with an ankle problem.

It was a sign of things to come. Transfermarkt lists 23 separate injuries that the defender has had throughout his United career – from concussion to a broken toe.

Meanwhile, earlier this year he passed the unwanted milestone of missing more games through injury than he has played for the club.

Then there are the memes. Jones has become known to pull faces when attempting a challenge or block, with cameras ready and waiting to capture his next LOL moment. This is probably something entirely out of the defender’s control, but nonetheless he has become the butt of jokes and subject to abuse.

If you search ‘Phil Jones’ on Google Images, you find as many pictures of the defender grimacing as you do him making a tackle. Even the 29-year-old’s main picture on Wikipedia is an unflattering one. It is easy to say that this shouldn’t affect a multi-million pound footballer, but that is naive. Jones, regarded as a humble and self-deprecating character in the game, is no longer on social media.

When a testimonial – which would be due for this summer – was discussed in his contract talks in 2019, Jones shut down the possibility. The Athletic reported that when asked about it, he would simply reply: “Apart from my mum and dad, who else would turn up?”.

When Jones signed that new deal two years ago, Ole Gunnar Solskjaer said: “He is coming up to his 27th birthday and entering into his prime years as a centre-half.”

But instead of his prime years, the last 24 months have arguably been the most difficult of Jones’s career. He has played just 16 times and not featured at all since January 2020 against Tranmere Rovers as a knee injury proves particularly difficult to recover from.

In one of his last Premier League appearances against Sheffield United, his error gifted the Blades the lead and he was substituted at half-time.

In March, Jones was pictured back training at Carrington for the first time in 2021, and he will hope that the future is a little brighter – whether that is at United or elsewhere. If Jones was to leave the club, he would still walk away with a winners medal from the Premier League, FA Cup and Europa League. The fact he does not have more is reflective of United’s struggles post-Ferguson rather than any personal issue.

He has made more appearances for the Red Devils (224) than fellow centre-backs Paul McGrath and Jaap Stam, who are both considered club legends. That is not to place Jones in the same bracket as that pair, but it is certainly no mean feat at a club the size of United.

It also suggests he has the ability and Sir Alex has not been the only manager to hype up Jones. England boss Gareth Southgate said in September 2017 that he was “the best defender” that the country had.

The following month Southgate picked Jones in his squad for a pair of World Cup qualifiers, only for the centre-back to withdraw through injury.

It was the story of his career.