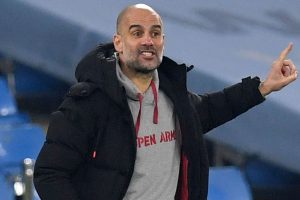 Manchester City boss Pep Guardiola wants his stars to go on and create a dynasty.

But Guardiola has warned them not to start believing in their own hype – otherwise it could all come crashing down around them like it has at Liverpool.

City host neighbours Manchester United tomorrow looking to take another huge step towards what would be their third league title in the last four seasons.

Guardiola's men are on course to land a quadruple haul of trophies this season that would cement their status as the best team to ever grace English football.

The Spaniard admits it could be the start of something special and that his players have a remarkable hunger to go on and keep winning things.

But he knows Liverpool are living proof of how hard it is to remain at the top – after seeing Jurgen Klopp's men make a pitiful defence of their English crown this season.

Guardiola, whose side are on a sensational 21 game winning streak heading into the derby, said: "The hunger comes form ourselves, the desire to win the games. No words can inject desire, it comes from inside, competing with their mates to do the best we can.

"To do what we've done and kept winning, it's because these guys have something special, like we had at Barcelona and Bayern Munich.

"Definitely (we haven't reached our potential), so that's why we are here, thinking we can do better.

"But it's about the relations between all of them and how we handle the good moments. Listen, when you win something it doesn't mean anything for the future, that's what I’ve learned.

"Always you see the warnings. After Liverpool (won the title) people said they'd dominate the next four or five years – and look what happened? The reality in sport is tomorrow, and we'll see what happens.

"In the summer, we will sit down and take the right decisions and start to think about next season. I don't believe it when people say it will last a long time.

"It's what you do today and so far we've been magnificent, but it's March and nobody wins titles. But I’ve seen in the team that commitment and on Sunday we want to do it again."

United come to the Etihad on the back of three goalless draws in a row in all competitions that has seen them lose more ground on their bitter rivals above them.

But Guardiola believes United are still a force to be reckoned with and he added: "They are so strong is all departments, defence, midfield, they have quality with Bruno (Fernandes) and people with pace up front.

"The experience of (Edinson) Cavani, one of players I admire the most for what he's done in his career. Guys, it's Manchester United, all the time they're a top club. It's a priviledge to compete with them. We are going to be ourselves, do what we've done and be ourselves."

READ MORE: 'Embarrassing' Liverpool 'only have one way to play' after Chelsea defeat