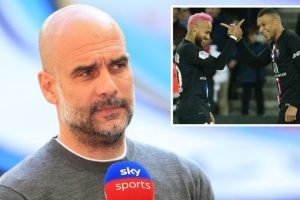 Manchester City boss Pep Guardiola has revealed that he has had sleepless nights trying to think of a way to stop PSG pair Kylian Mbappe and Neymar in tonight’s Champions League semi-final.

City go to the Parc des Princes tonight hoping to put one foot in their first-ever Champions League final.

But they must first halt the mercurial attacking talent that the Ligue 1 side possess.

Mbappe has scored 35 goals in all competitions this season, while Neymar has added 13 despite spending large chunks of the campaign sidelined through injury. 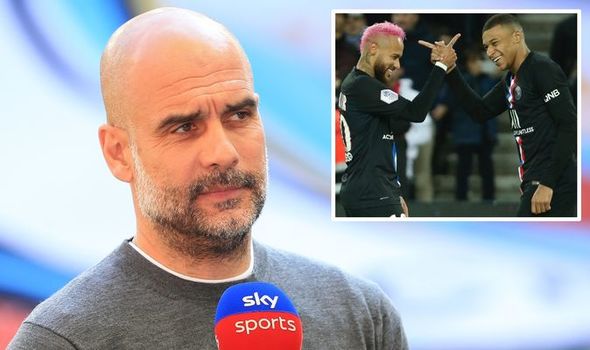 Guardiola said that he has only been able to sleep when he is not thinking about the duo.

“They’re too good. I tried to sleep well last night, and that was (only) when I wasn’t thinking of them,” the 50-year-old said in his pre-match press conference yesterday.

“That’s the reality. They’re top players. That’s why they play in that team with the quality they have.

“We’re ready to try to stop them, defend as a team, play good football and try to score goals.”

Guardiola missed out on coaching Neymar at Barcelona by a year. The Brazilian joined the Spanish giants from Santos in the summer of 2013, 12 months after the City boss decided to take a sabbatical from football.

Neymar scored 105 goals in 186 appearances for Barcelona. He won two La Ligas, three Copa del Reys and a Champions League – scoring in the 2015 final against Juventus – before moving to PSG in the summer of 2017 for a world-record fee of £198m.

Guardiola took charge of Bayern Munich in 2013 before ending up at City in 2016.

But the Spaniard says he first came across the now 29-year-old when he was at Brazilian side Santos. He showed a video of the then teenager to a group of his Barcelona players.

Had Neymar remained at Barcelona for a few more years, Guardiola feels they would have won more European titles.

“I remember when I saw some clips of Santos in that era and I said to the (Barcelona) players, ‘This is the king of Santos’, and all the players were open-mouthed,” he said.

“He has Brazil on his shoulders, the number 10 shirt of Brazil isn’t easy to wear.

“I’m pretty sure if he had stayed in Barca they would have won two, three more Champions Leagues. With Neymar, (Lionel) Messi and (Luis) Suarez, the best three I’ve seen.”