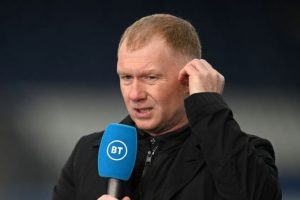 Manchester United legend Paul Scholes has discussed both Antonio Conte and Michael Carrick in light of their respective run-ins with the Red Devils hotseat. Conte was eventually appointed Tottenham manager earlier this month, while Carrick has been placed in temporary charge of United after Ole Gunnar Solskjaer’s sacking.

Although not many expect Carrick to be in charge beyond the next few games, he made a superb early impression thanks to victory over Villarreal.

Tactically, United were markedly different under the Englishman compared to Solskjaer’s preferred set-up, and their early cautiousness on Tuesday night was eventually rewarded.

Cristiano Ronaldo, playing in a wide left position, was the first to get amongst the goals before Jadon Sancho notched his first for the club in style to seal a 2-0 win.

Scholes may have been left slightly red-faced in light of his criticism of Carrick before kick-off when he claimed that the club’s backroom staff should have quit when Solskjaer left.

With United’s manager hunt ongoing behind the scenes, and Conte not involved after a close call, Scholes had his say on the current state of affairs at Old Trafford.

“I can see why they wouldn’t appoint Conte, I think I probably would be looking at his record and what’s available it just feels like a short-term thing,” he told BT Sport.

“Okay he’s not proven himself to be an elite manager at the minute but what he did at Spurs was a brilliant achievement.

“Man Utd need a long-term manager to build because they have two big problems – Liverpool and Man City, you’re telling me Conte could come in and get them anywhere near them? I don’t see it.

“We’ve said this for four or five years, but if they bring a proper coach in, a new coach can bring the best out of these players.

“Recruitment-wise if you’re relying on your striker who’s 36, I worry. I think they need a midfielder when it comes to controlling the game they need to see runs.”

After his pre-kick-off rant, Scholes was once again pressed on the idea of Carrick either taking over on an interim basis until the end of the season or on a longer-term basis if results improve.

“This is Manchester United they have to have the best in charge,” he insisted.

“Michael Carrick is a coach he’s had one game in charge with no experience anywhere else, he can’t.

“As much as I like the lad they can’t appoint him they need the very best at interim or full-time.”