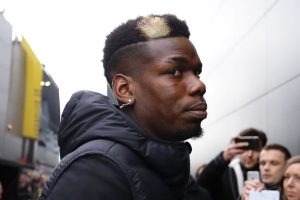 Manchester United are prepared to sell Paul Pogba after he rejected a mammoth contract offer.

United were keen to tie down the France international to a long-term deal this summer.

But Pogba, who has a year left on his current £250,000-a-week deal, has knocked back their £350,000-a-week offer to force through an exit from Old Trafford during the transfer window.

And Ole Gunnar Solskjear's men are now willing to sell the midfielder so he doesn't leave for free in 12 month's time.

PSG are leading the race for his signature, but there are a host of other clubs that could be interested in acquiring his services.

Here are four potential landing spots for Pogba if he leaves Man Utd this summer.

Which club will Paul Pogba be with when the transfer window closes? Comment below

Paris St Germain is Pogba's preferred destination as a return to his homeland almost seems inevitable.

The Ligue 1 side are reading a £45million offer for the 28-year-old but the Red Devils are holding out for their £50m valuation.

The French outfit have been making serious moves during this window as they look to finally get over the hump in the Champions League, as well as reclaiming the league title after a disappointing campaign.

Italy World Cup hero Gianluigi Donnarumma and Achraf Hakimi have joined the Parisian side in recent weeks and Pogba could be next on their list.

The La Liga giants have been continually linked with Pogba so they have to come under consideration.

New boss Carlo Ancelotti is looking to rebuild an aging Real Madrid midfield that consists of Toni Kross and Luka Modric and Pogba could be the perfect solution.

Madrid have mightily struggled in the post-Ronaldo era and a statement signing like Pogba would go a long way in getting the Bernabeu faithful back on side.

We have undoubtedly saw the best version of Pogba during his time in Italy as he was given the freedom to roam around that star-studded Juventus midfield.

And it was those performances that convinced United to shell out a club-record fee of £89m for him in 2016.

He hasn't lived up to those expectations but perhaps he could rekindle that magic back in Turin.

Juventus, like Madrid, are crying out for reinforcements in the middle of the park and signing a player of Pogba's quality, who is also familiar with the club, seems a no-brainer if they can get the funds together.

Could Pogba make the dreaded move across the city in true Carlos Tevez fashion?

Stranger things have happened and let's not forget his agent Mino Raiola infamously offering him to Manchester City in 2018.

And who knows, it's an avenue he might look into once again.

City would have no issue raising the required funds, but whether United would sell one of their best players to a rival club is a serious hurdle that Pep Guardiola's men would need to overcome.