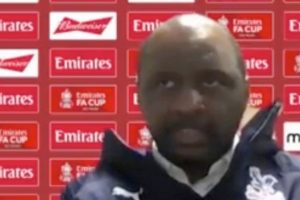 Patrick Vieira ripped into the Millwall fans who booed his Crystal Palace players as they took the knee ahead of their FA Cup third round clash.

The two sides met in a London derby at The Den on Saturday afternoon but the match was marred by the behaviour of some sections of the home support.

In addition to booing the knee, Millwall fans were also heard singing homophobic chants, while Palace goalscorer Michael Olise was hit with a bottle thrown from the crowd.

Broadcasters ITV were forced to apologise for foul language and abusive chanting during the match.

Following the match, Vieira condemned the behaviour of those who booed his players by saying: “As a football club, we are against any kind of discrimination of course and this is not something that we want to see on the field.

“Taking the knee, that is something that we are really proud to take and every football club and player making their decision.

“What is important is to show that as a football club we are against discrimination.”

This is not the first time that Millwall fans have been accused of booing the knee this season, with Fulham's players also booed ahead of their Championship meeting back in August.

What punishment should Millwall receive for their fans' behaviour? Let us know in the comments section below.

A message had been displayed on the big screen at the stadium discouraging fans from booing the knee prior to the match.

Millwall have since said that they will investigate the reports that some fans chanted homophobic abuse during the match.

Meanwhile, Olise was struck by a bottle thrown from the crowd before taunting the home fans in the crowd.

As for the action on the pitch, Palace came from behind to win 2-1 and reach the fourth round for the first time in three years.

Benik Afobe had given the hosts a first half lead after capitalising on a mistake from Jack Butland in the Palace goal.

However, Olise equalised for Vieira's side just one minute after the interval before setting up Jean-Philippe Mateta for the winner just before the hour mark.