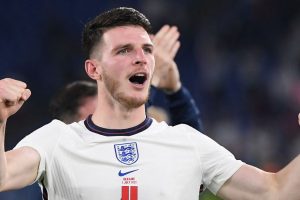 West Ham United legend Paolo di Canio has praised midfielder Declan Rice and is unsurprised that he is a serious target for several clubs such as Chelsea.

The Italian highlighted Rice’s performance in midfield for England at Euro 2020 and just like many fans and pundits alike, Di Canio is thoroughly impressed.

When talking about England’s midfield on talkSPORT, Di Canio picked out Rice for praise, saying: “They were incredible and made them [England] nearly impossible to beat.

“He’s a fantastic guy because he’s a specialist in this position in midfield.

“They were incredible and made them [England] nearly impossible to beat.

“Rice became the third central defender against Ukraine and he sorted out any problems, he’s a very, very good player.”

Then, he believed Rice was the ideal fit for a club like Chelsea and that Rice could become one of the world’s best in his position.

Over the course of the last year, he has been linked with moves to the Premier League’s top clubs such as Chelsea, Manchester City and Manchester United, but they may be put off by West Ham’s huge asking price.

Di Canio added: “It’s no coincidence that in England you hear about Chelsea interest.

“To have Rice at this time in his career with the prospects that he can become one of the best in his position with his physical presence.

Do you think Declan Rice will leave West Ham this summer? Let us know in the comments below.

Rice has been integral to England and has featured in every has set out at this tournament, as they reached the semi-finals, where they will face Denmark tonight at Wembley.

He has formed a fine partnership in midfield alongside Leeds United’s Kalvin Phillips and is expected to start again in the match against Denmark.

A win for England tonight will put them in a final in a major tournament for the first time since they won the World Cup in 1966.