On This Day in 2013: Bradford stun Aston Villa to reach League Cup final 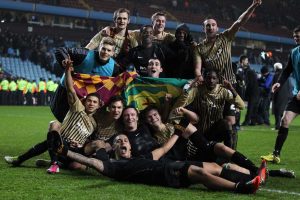 Bradford became the first fourth-tier club to reach the League Cup final for 51 years after beating Aston Villa 4-3 on aggregate on this day in 2013.

Villa were unable to claw back the 3-1 deficit from the first leg of the Capital One Cup semi-final even though leading scorer Christian Benteke put them in front in the second leg before half-time.

James Hanson’s headed effort early in the second period effectively killed off the tie and substitute Garry Thompson came within inches of making a spectacular contribution as his shot thumped against the bar.

Villa manager Paul Lambert brought on a fourth striker in Andreas Weimann and he put Villa ahead on the night again late on after Benteke’s flick-on, but it was too little, too late.

The final whistle was the cue for wild scenes of delight from Bradford manager Phil Parkinson and his players, who had overcome Arsenal in the previous round.

The only other club from the bottom division to reach the final was Rochdale in 1962, when the competition was in its infancy and many of the leading sides did not participate.

Sadly for Bradford, the final at Wembley proved an unhappier occasion as Swansea strolled to a 5-0 victory to qualify for the Europa League.

Nathan Dyer scored twice, Michu found the net before the break and Jonathan de Guzman’s double confirmed the biggest win in final history as Swansea secured the first meaningful silverware in their existence.