ON THE ROAD: Bermudan boys help Quakers quest as Darlington aim to banish ghosts of troubled past

For those looking to break the ice with a Darlington fan any time soon, be aware that the name ‘George Reynolds’ is a conversational killer.

It’s 16 years since the businessman ripped the heart out of the club, spending money they didn’t have to build a preposterous 25,000-capacity Reynolds Stadium, a monument to his own narcissism that plunged them into administration.

Reynolds served six months in prison for tax evasion and was back in the pages of the Northern Echo a few weeks ago — convicted of harassing a councillor who’d opposed his latest leisure development. 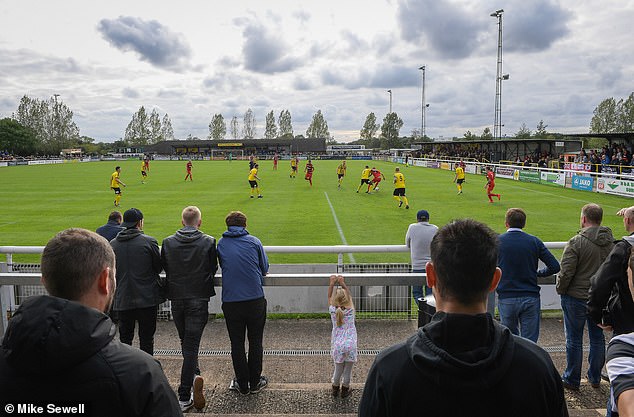 Sportsmail is on a journey through the 2019-20 FA Cup, following a team from the extra preliminary round until they are beaten, then continuing with their conquerors.

The journey so far:

Journey to Wembley, a similar chronicle of the 1976-77 competition by Sportsmail’s Brian James, also began at Tividale…

The accompanying reports describing him as ‘the ex-Darlington chairman’ went down very badly indeed. ‘It was years ago but they’re still associating him with us,’ says one of the 50 or so fans who have made the 180-mile journey to Leamington’s modest, immaculate stadium.

Darlington went into administration twice more before they were relegated four divisions on the FA’s recommendation and started again in 2012 under fan ownership in the Northern League, sharing Bishop Auckland’s ground.

After three consecutive promotions, the Quakers have struggled to get beyond the sixth-tier National League North.

Their £300,000 annual playing budget — including 40-week contracts for most of their players — is nearly double that of Leamington, who have just a handful on contracts, but that kind of differential means little here. Darlo are a point behind the home team — another phoenix club — in the league.

‘You need more than money to succeed where we are,’ says John Vickerman, adviser to the Darlington board in a club run top to bottom by volunteers.

Leamington’s little press box provides a graphic sense of the multiple sorrows that Bury will be experiencing when they re-form. Ray Simpson, who handles Darlington’s media liaison, is reporting on the game for BBC radio and the North East papers. Both sent their own staff in the days before the fall from grace.

The field of play tells a story of diminishment, too. Darlo look every bit the struggling side, incapable of holding possession or securing a foothold as Paul Holleran’s Leamington deploy target men Josh March and Jack Edwards to great effect, with Kaiman Anderson an effective provider.

There is £11,250 prize-money for the winners and the Brakes —Leamington are a one-time automotive parts factory team — seem more absorbed with the FA Cup third qualifying round than the visitors. Groundsman Idris Elms doesn’t mind saying that his surface — tricky to maintain because of the Warwickshire blue clay beneath — would be good enough for Manchester City, should such an encounter come to pass.

In this world of tight margins, everyone’s looking for the lucky break: the unspotted player who can instigate a Cup run. Holleran has a knack of finding them and in many cases reviving their lost self-belief, as Reece Flanagan, his outstanding No 8, demonstrates in the first 45 minutes. He’s dropped down three divisions from Walsall to be on loan here.

Darlington manager Alun Armstrong has Tyrone O’Neill, a thin strip of a striker who turned 20 last week. He didn’t know what hit him when he first arrived on a six-month loan from Middlesbrough in July and struggles as much as anyone in his team’s poor first half. But on 64 minutes, his class tells. O’Neill takes a ball from Adam Campbell on his chest, swivels and shoots right-footed with minimal back-lift, burying the ball in the bottom left hand corner of the net.

It’s a stinging blow to a home side who immediately bring two saves of the highest order from Darlington’s Liam Connell. But William Hatfield, anchoring midfield, steadies Darlington, who score again. O’Neill initiates a move which sees the ball navigated through Jarrett Rivers to substitute Justin Donawa, who is travelling away from goal when he angles a shot back under Jack Weaver.

Donawa is one of two Bermudan internationals on Darlington’s books. One of the club’s directors has a link to that country. ‘Connections,’ says Vickerman after the final whistle sounds. ‘They can make all the difference.’

The sizeable crowd of 605 demonstrates that Leamington had felt this might just be their year. But Darlington leave with the aspirations.

‘We’ve no major investor, which is fine after all we’ve been through,’ says Chris Stockdale, chairman of the club’s supporters group. ‘So a Cup run would mean so much.’

They had not won a single qualifying round in seven years under fan ownership before this season. Now they’re looking to bury Reynolds even further into the past.