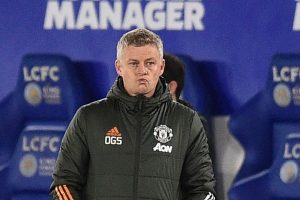 Danny Murphy believes Manchester United will sack Ole Gunnar Solskjaer if the club "don't win the Europa League and only finish in the top four".

United have not yet won a trophy under Solskjaer and they have come up short in four semi-finals over the past two seasons.

They were knocked out of the FA Cup at the quarter-final stage by Leicester on Sunday and, with United 14 points off league leaders Manchester City and already out of the Carabao Cup, the Europa League remains their only chance of winning a trophy this season.

Murphy believes Solskjaer needs to win that trophy or United will "make a change."

Speaking to talkSPORT, Murphy said: "They can't be blaming tiredness for a loss at Leicester in the FA Cup and their squad not being strong enough.

"United competing in the Europa League is not good enough, first and foremost, the fans know that, the club know that and Ole knows that. Not progressing in the Champions League was a massive, massive blow for them.

"Yes, they're going to get in the top four… but so they damn should! He's in a position for me where the Europa League, for me, has become monumental for him and the club.

"I like him and I'm not one who wants to see managers sacked and I do think they've made some strides forward, but Manchester United have to be doing better.

"If they don't win the Europa League and only finish in the top four then I think they'll make a change."

Speaking ahead of United's defeat to Leicester, Solskjaer said: "We're all aiming to win trophies at this club, but sometimes the trophy can hide other things that are happening at the club.

"It's in the league positions that you see whether you're progressing, really. The cups you can be lucky or unlucky. Of course we're aiming to win, that's why you play football.

"I felt a big rebuild had to be made. The league is always the bread and butter and that's when you see how capable you are.

"The cups are sometimes an ego thing for managers and clubs. It's not like a trophy will say 'we are back', no. It's gradual progression at the top of the league. Sometimes the cup competitions can hide your progress a bit."