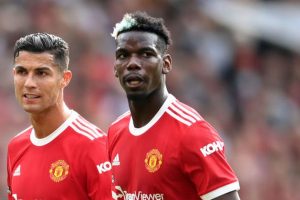 The Norwegian has been delighted with the efforts of the France international since he returned from his summer break, but followed it up by saying that he doesn't pay attention to assists.

The 28-year-old has been credited with seven assists across the opening four Premier League games of the season, putting him in a strong position to break the record of 20.

That is jointly held by both Arsenal hero Thierry Henry and Manchester City creator Kevin De Bruyne, but Pogba might not get a congratulations from his manager if he does do it. Solskjaer said of the midfielder ahead of their Champions League clash against Young Boys: "Paul has come back in good shape. He's worked really hard over the summer. He's come back lean and fit.

"What does an assist consist of? A square pass to Bruno (Fernandes) and he puts it in the top corner? Or a great ball for Mason (Greenwood)? Paul has always been a great passer and he's not got assists from his best passes this season.

"I don't pay attention to assists, it's a social media thing. But Paul has played well for sure.

"I would give Anthony Martial the assist for Jesse's, he leaves the ball like (Dwight) Yorke and (Andy) Cole, there's so much more than stats."

Is Solskjaer right about Pogba's assist tally? Give us your thoughts in the comments section

Solskjaer was also asked about the future of Pogba with his contract due to expire at the end of the season, and he mentioned what the club can do to convince him to stay.

He said: "It's up to us to get results and to prove to ourselves that we can win trophies.

"It's the most magical feeling in the world to be part of a winning Manchester United team."

Adding of his team in general: "We've had enough disappointments, that's for sure, and some big moments as well.

"But this team has grown and matured over the last few seasons. That was always the plan (when I came in), we said in three years' time we'd have a squad with experience and quality that could challenge.

"With players like David (De Gea), Harry Maguire, who's been here a couple of years, you get that spine in the team with experience and quality. With Raphael (Varane) and Cristiano (Ronaldo) coming in that add to that.

"It's not the last bit, you can never say it's the last bit, but it's that something that you have to buy unless you've already won it yourself."