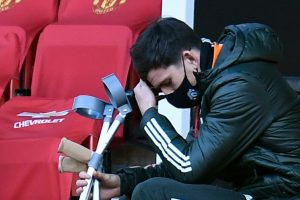 Manchester United boss Ole Gunnar Solskjaer has offered a fresh update on Harry Maguire ahead of the Europa League final.

The ever-present Red Devils defender limped out of the recent clash with Aston Villa and now looks a doubt for the European showpiece on Wednesday evening.

Maguire was spotted on crutches earlier this month but was then seen walking unaided at a movie premiere earlier this week.

And it appears Solskjaer has changed his selection deadline when it comes to having his captain fit for the Villarreal clash.

"I'll give him until Wednesday afternoon on that one, but I don't have high hopes."

But has Solskjaer changed his mind?

Earlier this week, the United boss said he would only give Maguire until Tuesday to prove he is fit enough to feature in Poland.

“To be honest, I don’t think we’ll see him in Gdansk, no, but as I’ve said so many times, I’m going to give him until Tuesday night, the last training session, to see if he can try to be out there," he said.

While Maguire's absence is still expected, fans will be relieved to here the former Leicester man could feature.

As for who starts in goal for United, Solskjaer admits he is still undecided.

"Yeah of course we've got Wednesday in mind," he said this afternoon after Dean Henderson started vs Wolves.

"Dean is ready for a game again. David played the previous one.

"Dean's had a very good season and I want him to show his personality and quality behind a team that's not played too many games together. We played a similar one against Leicester, it'll be a test for him."