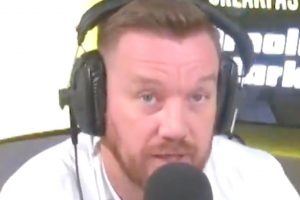 Former Tottenham star and radio presenter Jamie O'Hara has made the bold claim that he believes the Moon landings were faked.

Speaking on the talkSPORT Breakfast show, O'Hara got the debate rolling about a conspiracy theory that has gripped the world since the 1970's.

Of course, back in 1969, NASA astronauts Neil Armstrong and Buzz Aldrin made ground-breaking history as they became the first humans to step foot on the moon.

However, conspiracy theorists allege that the whole thing was in fact filmed on earth by NASA, with many of the various aspects of the moon landings being highly scrutinised.

And it looks like Carling Cup winner and former journeyman midfielder O'Hara is one of those as he believes that the advancements in technology should have led to some sort of civilisation being started there.

When reminded that Tuesday is the anniversary of the first Moon landing by co-presenter Natalie Sawyer, O'Hara was quick to air his controversial views that he thinks it was all a hoax.

O'Hara said live on air: "Did they? A really nice, big sort of container out there in Nevada somewhere.

"Have you seen the state of that rocket? Absolutely no chance that landed on the Moon. No chance.

"The question I ask is, why have they not gone back? 52 years down the line they should have a city on the Moon.

"Look what we've done in 52 years since we landed on the Moon, look what they have done in this world.

"You're telling me…they've never been back!"

O'Hara didn't let the conversation end there though as he took to his Twitter to keep the discussion rolling.

He asked his followers: "All that moon chat this morning got me in the mood for a top space film, I’m thinking Gravity or Armageddon, any recommendations?"

O'Hara also posted a picture that appeared to show a different footprint on the moon to those on Neil Armstrong's spacesuit, alongside some laughing emojis.