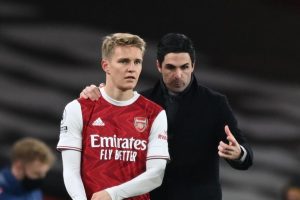 Martin Odegaard has left the door open to a permanent switch to Arsenal after discussing the key factors important to him at club level.

The performances of the Norwegian midfielder have already convinced Mikel Arteta he is a player to keep around The Emirates if a deal can be struck with Real Madrid this summer.

Madrid's initial thought process was for Odegaard to get regular first-team minutes out on loan before returning to the Bernabeu ahead of next season, though with finances tight, they could be tempted into offloading the youngster for the right price.

Odegaard has so far failed to force his way into regular contention at Madrid and would likely find himself in a similar position on the fringes of Zinedine Zidane's starting XI for the Los Blancos next season.

And he may well see his immediate future lying elsewhere after sending a clear message to his parent club about the non-negotiable criteria he wants to be met.

"I haven't thought about what'll happen in summer. The deal with Arsenal is until the end of season. We'll see what happens this summer," he told a press conference while on international duty.

"I've said things before that I still stand for: Stability and development are key words."

They may be key words for Odegaard, but they are not things he can likely expect to find under Zidane's regime back in Spain, though are all-but guaranteed to him at Arsenal.

While Madrid have done a decent job of guiding Odegaard's path to senior level, his chances in their side have so far been few and far between.

His stint at Arsenal is now his fourth loan spell in as many seasons and was sanctioned after Odegaard made just nine appearances for Madrid in the front half of the campaign – only five of which were as a starter, and in none of those did he complete the full 90 minutes.

Zidane has even revealed Odegaard went against his word to force through his switch to north London.

“He wanted to leave, we have spoken about it two or three times. He is a player who wants to play," Zidane told Marca.

“Martin wanted to leave, he wanted to get minutes and chances elsewhere. The player demanded it. I told him to stay and fight, but it wasn’t to be.

“In the end it is everyone’s decision. I hope he is happy.”

You can't really blame Odegaard for seeking out further opportunities, given Madrid have an abundance of talent ahead of him in the pecking order.

In addition to the experienced trio of Luka Modric, Toni Kroos and Casemiro, the La Liga giants also have Federico Valverde – who at 22 (the same age as Odegaard) has already racked up almost 100 appearances for the club.

He does have the option of battling for a place next season, but after tasting Premier League football with Arsenal, and already instilled as Norway's captain, may now think otherwise.

Certainly his relationship with Arteta could prove pivotal in his decison.

Asked how he finds working with the Gunners' boss, Odegaard replied: "Very good. He is incredible. I have a lot to learn from him. I just need to 'sharpen my ears' and pay attention. He is fantastic."