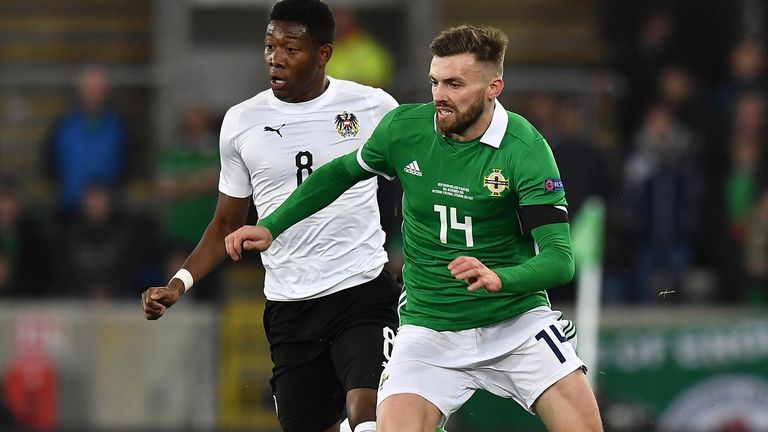 Northern Ireland were dealt a late blow as Austria scored in the final seconds of their Nations League tie to win 2-1 and seal some unwanted history.

Michael O’Neill’s side were on their way to picking up their first Nations League point, but a 92nd-minute goal from Valentino Lazaro saw them beaten again, and they have now lost their last four competitive home games for the first time.

After a goalless first half, Xaver Schlager (49) opened the scoring for Austria before Corry Evans (56) netted Northern Ireland’s first goal in four games to level the score.

But it was a late blow for the hosts that sees them end their Nations League campaign with no points and relegation to League C – which had already been confirmed – while Austria finish second in Group B3 behind Bosnia & Herzegovina.

Man of the match: Corry Evans.

Northern Ireland had been creating chances despite their goal drought, and had two good efforts in the opening 20 minutes.

Heinz Lindner was forced into a fingertip save in the seventh minute when Evans’ shot deflected off Stefan Lainer, and the Blackburn midfielder was involved again not long after as Liam Boyce’s header from a Niall McGinn free-kick hit the back of Jonny Evans before falling to Evans at the far post, but the flag went up for offside as his strike was blocked.

The hosts went close again just before the break, but McGinn’s free-kick curled just wide of the near post after Schlager had fouled George Saville just outside the area.

And Austria were head four minutes into the second period when half-time substitute Peter Zulj cut the ball back for Schalger, who powered an effort home past Carson to score on his first start for Austria.

But Northern Ireland were level eight minutes later when Jordan Jones slipped the ball into the path of Evans, who saw his effort come off the leg of the sliding Martin Hinteregger and loop into the back of the net.

Alaba then twice put efforts wide around as Austria rallied before George Saville went close for Northern Ireland on 77 minutes as Julian Baumgartlinger’s defensive header landed into the path of the Middlesbrough midfielder, but his strike went just past the upright. 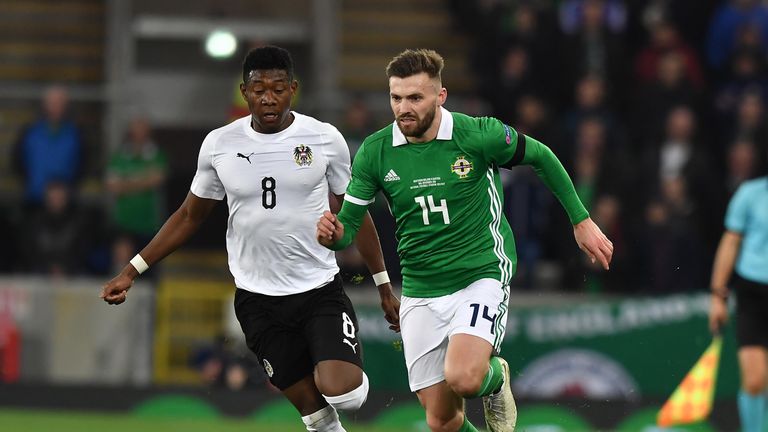 But Austria sealed the three points with the last kick of the game. Some poor play from Jones allowed Alaba to nick the ball and feed Marko Arnautovic, who swept it across for the incoming Lazaro to curl home into the far corner.

Man of the match – Corry Evans

Corry Evans scores his 1st @NorthernIreland goal for over 8 years – his only other international goal was a 1-0 winner in Slovenia in Sept 2010 pic.twitter.com/QAVxejIk3B

Despite the late defeat, Corry Evans had a good evening at Windsor Park. He had two of Northern Ireland’s best chances in the first half and it was third time lucky with his goal, which he fully deserved.

It broke the hosts’ scoring duck and it should give the player and the team a bit of a confidence boost before they begin qualification for Euro 2020.

Future international fixtures for both teams are yet to be announced, but they will find out who they will face in qualifying for the 2020 European Championships on December 2.