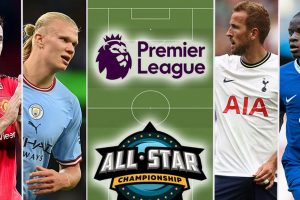 A lot of people might have sneered at Todd Boehly's suggestion of a Premier League All-Star match, but let's be honest, we'd all love to see it.

Sure, logistically it wouldn't work, and there's something a bit Machiavellian about an American storming into English football and instantly trying to Americanise it (what's next, hotdog stands and cheerleaders? Yee-haw!), but who among us hasn't wondered what a North v South match would look like?

That said, Daily Star Sport has taken it upon ourselves to pick what we think the two line-ups would be, taking into account a mix of each players' overall quality as well as their current form.

The first question to answer though, is how are we dividing north and south?

Well, we've decided to draw the line just below Birmingham, meaning that the four Midlands clubs are all considered 'northern' for this exercise.

That way, there are 10 Premier League teams in each half of the country. Perfect!

Would you make any changes to our teams? (Of course you would!) Let us know what they are in the comments section below.

Goalkeeper: First up, Alisson nips in ahead of Ederson to take the No 1 shirt for Team North, just as he does for Brazil. David de Gea might have challenged for the spot a few years ago but the Spaniard is comfortably below his Brazilian counterparts these days, and possibly even Emi Martinez and Jose Sa too.

Defenders: We've decided to be a little cheeky and pick Joao Cancelo as the right back for Team North. Granted, the Manchester City star tends to play on the left, but he's equally as effective on the right and we feel he's a more balanced full-back than the other major contenders for the spot: Trent Alexander-Arnold and Kyle Walker.

At centre back we've gone for a commanding partnership of Virgil van Dijk and Ruben Dias, while Liverpool's Andy Robertson slots in at left back.

Midfielders: Rodri edges Fabinho and Casemiro as the anchor in Team North's midfield, while Kevin De Bruyne and Bruno Fernandes get the nod beside him.

Forwards: Erling Haaland (obviously) starts up top, with Mo Salah playing off the right flank, and we've gone for Phil Foden on the left, who snuck in ahead of the likes of Luis Diaz and Bernardo Silva. No place for Cristiano Ronaldo – just like in Manchester United's team.

Manager: Pep Guardiola (just) gets the nod ahead of Jurgen Klopp, because you simply can't argue with four Premier League titles in five seasons, can you? Goalkeeper: This is one was difficult. A year ago, Edouard Mendy would've been a shoo-in, but the Chelsea stopper has made a shaky start to the season, so we've gone for Hugo Lloris instead.

Defenders: Reece James is the easy choice on the right side of defence, while Cristian Romero partners Thiago Silva at centre back. Oleksandr Zinchenko is our pick at left back after his impressive start at Arsenal, with Chelsea duo Ben Chilwell and Marc Cucurella narrowly missing out.

Midfielders: Declan Rice is Team South's holding midfielder while N'Golo Kante and Mason Mount take the other two slots either side of him. Martin Odegaard, Moises Caicedo and Alexis Mac Allister might feel a little hard done by given the form they're in, but you can't argue with the pedigree of our midfield trio.

Forwards: Harry Kane starts as our central striker while his Tottenham team-mate Heung-min Son and Chelsea's Raheem Sterling get in on the flanks, edging out the likes of Gabriel Jesus, Dejan Kulusevski and Bukayo Saka.

Manager: Antonio Conte is our straightforward pick. Thomas Tuchel would've given the Italian a run for his money prior to his brutal dismissal, though.

Who wins? Well that's for you to decide.