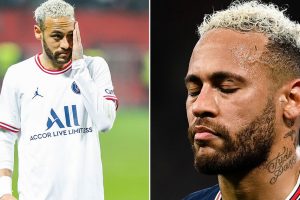 Neymar has complained about the ‘unhappy life’ of a professional footballer after 'not being able to celebrate birthdays'.

The 30-year-old Paris Saint Germain star has suffered criticism during his spell in France over his perceived lack of commitment to playing football. He has made just 92 league appearances for the French giants after five seasons, and his lively off-field lifestyle has seen fans and media complain about his constant absence.

But it appears the Brazilian has had enough of the criticism, taking to Twitter on Saturday to moan about the difficulties of being an elite-level athlete and not being allowed to enjoy himself.

He tweeted: “[After a loss] You can't celebrate your grandma's, son's, wife's birthday, and especially yours. Being an athlete is not easy, ‘you can only be happy after your career ends, how crazy’”

It comes after reports claimed the former Barcelona forward is set to retire from international football. Real Madrid winger and national teammate Rodrygo revealed Neymar had “promised him” his famous no.10 shirt ahead of his stepping down.

Rodrygo told PodPah: "Neymar said: 'I'm already leaving the national team and 10 is yours'. I didn't even know what to say to him.

Do you think footballers are unfairly criticised for having social lives despite losing? Let us know in the comments section.

“I was embarrassed, I giggled and didn't even know what to say properly. I told him that he has to play some more, that I didn't want to now and stuff. And then he had a laugh.”

Neymar is one of Brazil’s most successful footballers with 74 goals in 119 caps despite never delivering a major trophy for his nation. He is expected to play at the World Cup in Qatar later this year in what could be his last major tournament for the Selecao.