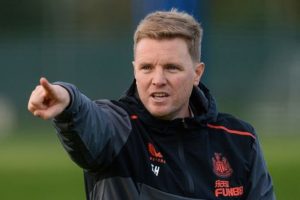 Newcastle manager Eddie Howe is apparently targeting four players to take to St James’ Park when the transfer market reopens in January. The Magpies dropped to the bottom of the table on Saturday after they drew 3-3 at home to Brentford.

Howe took the helm at Newcastle earlier this month but was forced to miss the clash with the Bees after testing positive for COVID-19.

The 43-year-old watched the game from his hotel room and saw an inspired attacking display as Newcastle found the back of the net three times for the first time this season.

But the Magpies illustrated their defensive frailties at the other end of the pitch and are still without a win all season.

According to The Northern Echo, Howe has told Newcastle chiefs he wants to bring in proven Premier League performers to give his side the best chance of beating the drop.

The club’s owners could have £200million to spend and have set their sights on targeting players who are either coming to the end of their contracts or are struggling for gametime at their current team.

Newcastle have the joint-worst defensive record in the top-flight after conceding a mouthwatering 27 goals this term.

Howe desperately needs to shore things up at the back and is keen to sign Burnley defender James Tarkowski.

The 29-year-old is out of contract next summer and could be available for a cut-price fee after refusing to sign a new deal at Turf Moor.

Tarkowski, who has won two caps for England, has made 171 Premier League appearances and knows what it takes to keep a side in the top-flight year after year.

Another player coming to the end of his contract is Jesse Lingard at Manchester United.

The winger had a successful loan at West Ham during the second half of last season but turned down a permanent move to the Hammers to fight for his place at Old Trafford.

But Lingard has barely been given an opportunity at United this season and the club could well cash in on him in January rather than allow him to leave for free at the end of the campaign.

Newcastle could do with some more firepower in front of goal to take the pressure off Callum Wilson and Allan Saint-Maximin.

Liverpool forward Divock Origi has proved he can find the back of the net when it really matters and could be a good addition to the Newcastle frontline.

Origi scored two goals for the Reds in their famous Champions League semi-final second-leg victory over Barcelona in 2019, before getting his name on the scoresheet as his team defeated Tottenham in the final.

The 26-year-old continues to be a bit-part player under Jurgen Klopp and Newcastle apparently want to take him on loan in January.

If Howe can persuade the player to swap the north west for the north east, Origi could be the man to fire the Magpies to Premier League safety.

The Ukrainian has fallen down the pecking order at the Etihad Stadium and has only been given 56 minutes of Premier League action this season.

City are unlikely to want the 24-year-old to leave as he still has two-and-a-half years remaining on his contract and is a good back-up option if Joao Cancelo gets injured.

But if Newcastle chiefs can somehow thrash out a deal for the player, it will be a major coup for the club.