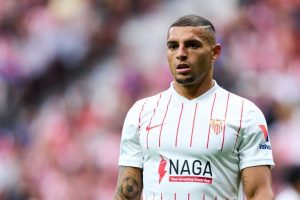 Newcastle are reportedly ready to make a £30million bid for Tyrone Mings after Aston Villa pinched long-term target Diego Carlos from under their noses. The Magpies made a move for the Sevilla centre-back in January, but have now been forced to turn their attention elsewhere following the news that Villa have reached an agreement over the Brazilian.

Villa confirmed on Friday evening that they have struck a £26m deal with Sevilla for the 29-year-old defender, which has subsequently cast doubts over Mings’ future. However, having missed out on former top target Carlos, Newcastle appear to be plotting a swoop.

According to the Daily Star, the Magpies are ‘waiting in the wings’ and could make a £30m move for Mings, who appears to be falling down Steven Gerrard’s pecking order. Not only will the arrival of Carlos provide competition for the England centre-back in the heart of the Villains’ defence, but Gerrard is also understood to be desperate to land Burnley’s James Tarkowski when his Clarets’ contract expires this summer.

Should the Villa boss be granted his wish, Mings may well be deemed surplus to requirements and cashed in on this summer. Newcastle are on the lookout for defensive reinforcements having been unsuccessful in their pursuits of both Sevilla’s Carlos and Lille’s Sven Botman in the January transfer window.

Opening up on his failed transfer to Tyneside, Carlos told ABC Sevilla back in February, “We know about the history of Newcastle, it is a team that is fighting not to drop out of the Premier League.

“They are building a project with the billionaire, who has bought them, who wants to make [them] a well-known club in a few years, but here we are very well classified and we play one of the best leagues in the world, against great teams.

“Sevilla have a very strong name around the world, the team is doing well… I talked to Monchi and told him to be calm, that if they want me here, I’m going to do my best because I owe the club a lot. We came to an agreement that I would stay.”

The arrival of Carlos from Sevilla has seen Villa continued their summer spending spree. Gerrard has already added Philippe Coutinho to his squad on a permanent basis in a £17m deal as well as acquiring Boubacar Kamara on a free transfer after the versatile 22-year-old ran down his Marseille contract.