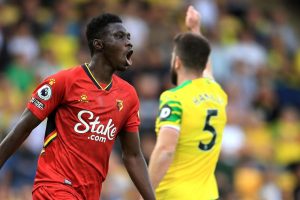 Newcastle United have been linked with Watford's Ismaila Sarr, as the Magpies look to complete their first transfer post-takeover.

The Toon Army were purchased by the PIF Group backed by Crown Prince Mohammed bin Salman earlier this month, making them the wealthiest side in club football.

With the new purchase, rumours have been floating around as to who will be Newcastle's first signing.

And Newcastle have set their sights on Sarr, but Watford are demanding around £100million for his services, according to the Daily Mail.

The Toon Army reportedly see Sarr as having a similar ceiling to Jack Grealish, who moved to Manchester City in the summer for a similar fee.

Sarr joined Watford in 2019 from Stade Rennes for a deal worth around a reported £40million.

The 23-year-old put pen to paper on a five-year deal that is set to expire in summer 2024.

The Senegalese international has impressed at Watford since his move in 2019, and he found the back of the net four times from nine appearances so far this campaign.

However, a deal in January may be tricky with the silky winger set to play a major role in the upcoming AFCON tournament.

Is Sarr worth £100million? Let us know in the comments section

Watford's keeper, and YouTuber, Ben Foster is a big fan of the winger: "He is frightening.

"How fast this guy is, I've never seen anything like it.

"His acceleration is phenomenal.

"Not only is he rapid, getting down the wing and putting the ball into the box, but now he's scoring goals as well."