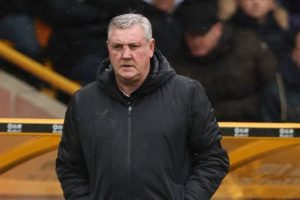 Newcastle United are expected to sack manager Steve Bruce ahead of their first game under new ownership this weekend, according to reports. Express Sport look at five available replacements Newcastle could immediately pursue as they look to turn their season around quickly.

Antonio Conte is unsurprisingly linked with every big job potentially on the table after his recent success with Inter Milan.

And many fans have suggested the former Chelsea boss won’t be interested in managing Newcastle at such an early stage of this new era.

However, Conte reportedly is intrigued by the position and is eager to return to the Premier League.

If Newcastle are willing to meet the Premier League-winning boss’ financial demands, he could yet be a realistic target.

The 43-year-old Englishman rejected an approach from Celtic before Ange Postecoglou took to the hot seat.

He could be waiting on the right Premier League opportunity to arise, and Newcastle would be an exciting proposition.

Whether the new ownership wants a candidate with more winning experience is another question.

Frank Lampard’s struggles at Chelsea may not make him a popular option among Newcastle fans, but the club are reportedly considering an approach.

The 43-year-old has been out of work since his Stamford Bridge sacking in January and would likely be interested if Newcastle came calling.

The Magpies might want a big name in English football to kick start their project, and Lampard would fit the bill.

Like Lampard, Newcastle are also considering Lucien Favre to take charge at the start of the club’s new era.

The 63-year-old boss is also available but only recently rejected an offer from Crystal Palace due to their status as a bottom-half Premier League club.

He would receive significantly more backing from Saudi Arabia’s Public Investment Fund than at Palace, though.

Perhaps a conversation with Newcastle’s new owners would shift his mindset.

Paulo Fonseca was courted by Tottenham Hotspur after being replaced at AS Roma by Jose Mourinho in the summer, but nothing came to fruition.

However, a Premier League switch could still be on the cards, with Newcastle reportedly viewing him as a candidate.

Fonseca has drawn comparisons to Chelsea manager Thomas Tuchel, which can only be a good thing given the German’s success in his brief stint with the Blues.

With games set to come thick and fast again, starting this week, Newcastle fans should expect developments in the coming days.