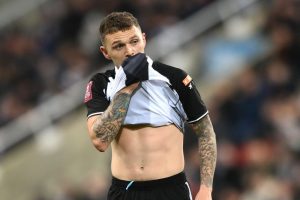 Eddie Howe's side crashed out of the competition as they suffered a humiliating 1-0 defeat to League One Cambridge United in the third round of Saturday afternoon.

The result means the Magpies remain on just one win in all competitions this season and club legend Alan Shearer branded the performance "pathetic" after the match.

Boyhood Newcastle fan Joe Ironside's 56th minute strike proved to be the difference between the sides, with Cambridge keeper Dimitar Mitov producing a man of the match display.

England international Trippier made his debut for the club after signing from Atletico Madrid on Friday to become the first arrival of the new era at Newcastle.

However, his new teammates reportedly ignored his request for them to applaud the 50,000 home fans at the final whistle on Saturday.

Ciaran Kelly of The Chronicle reports that Trippier attempted to call several players over to applaud the fans at full-time only for them to ignore him and head down the tunnel.

Will Newcastle United avoid relegation this season? Let us know in the comments section below.

Only a handful of players joined Howe, his staff and the substitutes in saluting the home supporters that had stayed until the end of what was a crushing defeat to a side 41 places below them in the pyramid.

Howe had named a strong line-up for the match in an attempt to lift morale with Newcastle embroiled in a tense relegation battle at the bottom of the Premier League table.

The new owners were also present in the stands and entered the dressing room at full-time to speak to the players after the defeat.

Newcastle's attention now turns back to the league as they prepare to face Watford in a relegation six-pointer at St. James' Park next Saturday.