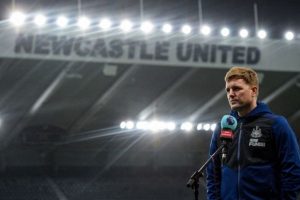 Newcastle kicked off their new era by completing the high-profile signing of England and Atletico Madrid right-back Kieran Trippier on Friday. The club reportedly want to bolster their defence with more signings to follow, and Eddie Howe has drawn up an exciting plan to get deals for Sven Botman and Diego Carlos over the line.

Trippier’s £12million move was heralded by many in the game, with the Bury-born full-back bringing a wealth of experience and talent to the northeast.

Having played in a Champions League final and a Euro 2020 final alongside boasting a La Liga winner’s medal to his name, Trippier is by far the most experienced player in Howe’s ranks.

Yet with the joint-worst defence in the league, the Magpies are reportedly not done there as they look to clamp down on defensive vulnerability.

The club were reported to have been in talks for Lille defender Botman earlier on Friday, although it became apparent that the French side were going to play hardball in terms of a transfer fee.

A move for Sevilla defender Carlos was then touted, with reports suggesting a move for the Brazilian was edging closer. However, according to the Athletic, Howe has a plan in mind to sign both.

Yet with Botman – one of Europe’s most sought-after young defenders – being brought in alongside the much more experienced Carlos, their defensive troubles could be solved.

The Magpies have also struggled at the other end of the pitch, scoring just 19 goals all season. Howe will likely also turn his attention to signing a forward once his defence has been strengthened.

Sky pundit Chris Kamara spoke to Express Sport about Newcastle’s strategy and expects Howe to spend big in January in a bid to achieve survival.

“[Allan] Saint-Maximin is a really good player, so build your team around him. Get players of his quality.

“The first thing Howe needs to do is stop the goals going in. Build from the back knowing that if you have a fit Saint-Maximin then he gives you a chance.

“I don’t think one player is going to fix it, I think they have got to show their intention and sign four or five players.

“They need them in situ for the next Premier League game.”

Newcastle’s next Premier League game is a relegation six-pointer against Watford on January 15.

And with Newcastle having won just one of their 19 league games, a victory at home to Claudio Ranieri’s men would be a huge boost to their survival hopes and morale.