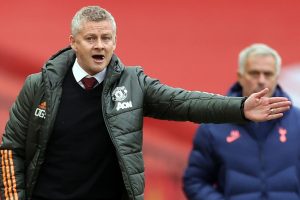 Ole Gunnar Solskjaer is ‘close’ to signing a new contract with Manchester United, though he will still be paid far less than what Jose Mourinho was.

Solskjaer steadied the Red Devils’ ship following Mourinho’s sacking in December 2018, leading them to second in the Premier League table this season.

The confirmation of the new senior management group has meant that United can now lay out their long-term plans for the future.

Solskjaer has led United to 76 wins in 135 matches in all competitions and is now set to be rewarded. That reward is set to take the form of a new contract, complete with a £2million-a-year pay rise.

Eurosport report that the United hierarchy will meet this week to discuss both transfer targets and confirm that Solskjaer will be handed a contract extension.

Though the United boss still has a year to run on his existing deal, it is believed the club wish to make their long-term strategy clear as they begin to sound out transfer targets for when the summer window opens.

The likes of Erling Haaland and Jadon Sancho will wish to hear United’s plans for bringing silverware back to Old Trafford, with their last major trophies coming back in 2017.

And although the Red Devils are 14 points behind league leaders Manchester City, the report also states that the hierarchy view Solskjaer as the best chance to win silverware.

The last two trophies United won, the Carabao Cup and the Europa League, came under the reign of Mourinho, who arrived at Old Trafford in 2016.

But the Portuguese manager was paid far more by United than Solskjaer, even when his contract extension is agreed.

With the reported pay rise taking him to a salary of £9m a year, Solskjaer’s deal will be far below the £18m that Mourinho was paid.