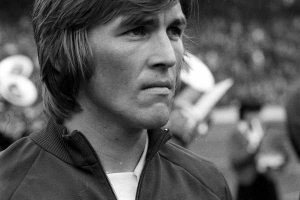 New Celtic manager Ange Postecoglou grew up idolising Parkhead great Kenny Dalglish and has vowed to put on a brand of football that will get supporters out of their seats.

The 55-year-old was born in Greece but raised in Australia and that is where he first felt the reach of the Hoops’ global pull.

Postecoglou is now the man tasked with piecing together not only a broken squad, but also the shattered relations between supporters and club.

And the former Australia head coach reckons the best way to do that is with all-out attacking football.

“I’ve had a passion for the game from a very young age,” the new Parkhead boss told CelticTV. “It was thrust upon me by my father, and he loved the entertainers. I had Kenny Dalglish posters all over my wall.

“I knew the moment I started my coaching career that I wanted to produce football teams that A, my father would like to watch, but that people would love to watch.

“You obviously have to be successful in this game, I wouldn’t have lasted this long if I wasn’t successful. I have a real clear idea on how I want my football teams to play, and that is to make sure our supporters don’t sit down for 90 minutes.”

Chief executive Peter Lawwell remains in charge for now at Celtic Park but from next month it will be Dominic McKay who calls the shots.

And Postecoglou says the close bond he has already developed with the former Scottish Rugby Union chief will be vital while he is forced to sit on his hands for 10 days.

The Australian is on his way to Scotland from Japan after being headhunted from his post at Yokohama F. Marinos but must quarantine before he will be allowed to meet his new squad at Lennoxtown.

“When I get there, I’ll have done a lot of work anyway. Because I really think from the moment I sort of touch ground there, I’ll get in amongst it and have as much information as possible, so I can make the best decisions for the football club moving forward.”

Celtic limped home a massive 25 points behind Steven Gerrard’s victorious Rangers side and Postecoglou is under no doubt about the scale of the task facing him to return the Hoops to their former position of dominance.

“I’ve seen the performances from last year, have an idea where they’re at and we’ll want to start the season really positively,” he added. “There’s no magic formula for that – just hard work.

“Once I get there I can’t wait to get started with the staff and the players. My job is to make sure they all realise their potential and hopefully produce something special for the club.

“I’ll get to know everyone and let them get to know me. I think it’s an important part of the strategy that I set us off in a direction.

“I’ve always said people have to believe in me more than anything else. Anything I say or do beyond that will be fruitless if they don’t believe in me as a person.

“That’ll be my first task – making sure everyone understands me as quickly as possible and then we start with all the facets of the club.

“The priority is to get this club back to where it should be and where the supporters want it to be. There’s no shortcuts – we’ll cover every base and make sure we’re ready for the first game.”