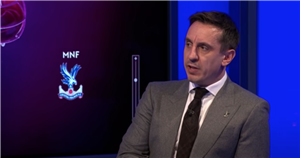 The maverick forward was a catalyst for Manchester United's success under Sir Alex Ferguson following his arrival from Leeds in 1992.

Cantona spent five years at Old Trafford and was at the centre of some of the most iconic moments in Premier League history.

His famous celebration following his goal against Sunderland in 1996 has stood the test of time.

And while he enjoyed many heroic moments, the infamous kung-fu king at Selhurst Park in 1995 saw him banned for eight months.

Cantona would certainly not be short of stories to tell despite his relatively brief stint in England following his surprise retirement at 30. Neville, who has sat in the Sky Sports studio with many famous names, has also said previously that the Frenchman would've struggled to adapt to the demands of the modern player.

Nowadays professionalism is key and the former player turned pundit believes Cantona's free spirit wouldn't have enjoyed the demands placed upon him, but longed to see players like the Frenchman in today's game.

"We always talk about characters and personalities – people who do things differently," Neville once said. "We thrive on that, it would be boring if you had the same stuff in interviews.

"We like characters but it happens less because of the importance of professionalism.

"In the 1990s, it was still allowed that you could go out for a drink. It wasn't the idea that you were superstars, you were footballers but there was still a connection with the man in the pub.

"That's become detached and players are now athletes, every time they put a foot wrong [they are criticised].

"People like [Eric] Cantona would've flouted lockdown rules. They're mavericks, they do what they want, they want freedom. What we expect from football players now, we don't allow that anymore – it's not tolerated.

"The mavericks of the game are being weaned out because of behaviours. I was boring as hell, no one wanted to be a Gary Neville!

"You want to see people like Cantona who express themselves differently, we're drumming it out of players."