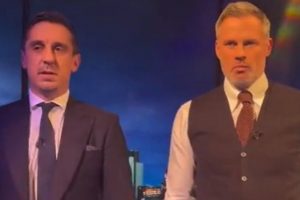 It was honours even as Gary Neville and Jamie Carragher settled on the best defender and the best pundit between them.

The Sky Sports duo took part in a game of 'who's most likely to' on the set of Monday Night Football, answering a range of questions where they had to pick either themself or the other.

When it came to who was the better defender during their respective playing days for Manchester United and Liverpool, the pair agreed on former right-back Neville – despite him being laughed at over the weekend for a clip of his suspect backtracking.

Later in the video shared to social media they were asked who is the better pundit, agreeing again but choosing Carragher this time as both took a share of the spoils.

Neville and Carragher clashed during the coverage of Tottenham's 1-0 away win at Fulham when they were discussing their top four predictions for the end of the season.

Do you agree with Neville and Carragher? Let us know in the comments section below

The former had league leaders Arsenal finishing third, but tipped their boss Mikel Arteta to be manager of the year, which didn't sit right with the latter.

Neville replied: "Right, Mikel Arteta is the manager of the year, even if he finishes third, second or first. It’s because at the end of last season, I thought they were in significant trouble. He (Carragher) said he thinks they’d be in big trouble this season, we both said it."

Carragher predicted a top four of Arsenal, Manchester City, Manchester United and Newcastle, while Neville tipped City for the league and Tottenham to pip the Magpies.