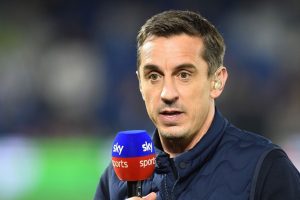 Gary Neville admitted Everton fans 'digged him in the ribs' when he fell into the crowd at Goodison Park.

Neville made the revelation after Marcus Rashford crashed into the advertising hoardings during Manchester United's 0-0 draw against Chelsea on Sunday.

Rashford sprinted to chase a long ball that was heading towards the byline, before back-heeling it to try and keep it in play.

But the Red Devils striker ran out of room to slow down, crashed into a pitchside microphone and tumbled head first over the boards.

And it took Neville back to his playing days as he recalled what supporters used to do to him if he ended up in the stands.

"That's the one when you run to the fans and they just give you a little dig in the ribs on the way back up," said the former United defender, who was on co-commentary duties for Sky Sports.

Asked by commentator Martin Tyler where that had happened to him, Neville laughed and replied: "Everton."

Of course, amid the current lockdown restrictions, there were no fans at Stamford Bridge to give Rashford similar treatment.

But there certainly were at Goodison back in 2005 when Neville was sent off after booting the ball into the crowd during what was United's first defeat to Everton in a decade.

It's no surprise he got rough treatment on away trips to the blue half of Merseyside after that – even though his brother Phil played for the Toffees.

And Everton fans on Twitter hadn't forgotten about the incident.

One supporter tweeted a clip of Rashford's tumble, along with Neville's commentary, with a crying laughing emoji.

Another replied, saying: "Definitely the time he lost his head and got sent off by the family enclosure."

And another tweeted: "Was that not when Neville kicked the ball into the crowd and shortly after got sent off never holds grudges that lad."

Neville's act of petulance at Goodison brought a furious rebuke from legendary United boss Sir Alex Ferguson, who said his experienced defender should have known better

"I don't know the exact rule but you can't kick a ball at the spectators, not nowadays anyway," said Ferguson after the defeat nearly 16 years ago.

United remained second in the Premier League following Sunday's draw at Chelsea, but they are now 12 points behind leaders Manchester City.

Chelsea stayed in fifth place, one point behind fourth-placed West Ham, five behind third-placed Leicester and six behind United.