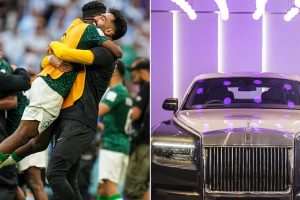 Saudi Arabia's players will be gifted a Rolls-Royce Phantom as a reward for their excellent victory over Argentina, according to reports.

The lowest ranked nation in the World Cup stunned Lionel Messi and co in what was one of the biggest shocks in the tournament’s victory. Messi appeared to have put the Copa America champions on their way to a comfortable three points when he stroked a penalty home in the first half.

However, Saleh Alshehri’s early goal in the second half was swiftly followed by a wonder strike from Salem Aldawsari to secure a historic result for the Middle Eastern country. And for their efforts, Saudi crown prince Mohammed bin Salman will award each player by giving them a Rolls Royce.

This seismic gift is another statement of how thrilled Bin Salman was by their result. Soon after Saudi secured the victory over the South Americans, a national holiday was declared to celebrate.

However, the super car is the latest symbol of his appreciation for the national team. A Rolls Royce Phantom is typically sold for around £363,300.

This means Bin Salman, who is believed to be worth around £8billion, will fork out around £9.4million to buy a car for each player in the team. And things could get even better for Herve Renard’s players if they are able to overcome Poland this afternoon.

Do you think Saudi Arabia can qualify for the knockout stages? Let us know in the comments section below

Robert Lewandowski’s side stumbled in their opening match against Mexico, with the Barcelona star himself also missing a penalty against the plucky Central Americans. Victory for Saudi would guarantee their place in the Round of 16 as group winners, if Argentina and Mexico also play out a draw.

However, Saudi manager Herve Renard insisted his feet are firmly on the ground shortly after beating Argentina. "Nothing has changed. We are still the lowest team in the group in terms of ranking and experience," said Renard.

"The only good thing at the end of this stage is to finish number one or two." The former Morocco and Ivory Coast manager also added "We know where we come from and we keep our humility because if we don't have the humility we won't be able to play a good game.”