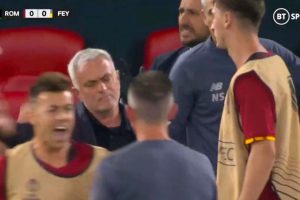 Roma boss Jose Mourinho looked less than impressed after his side toom the lead against Feyenoord, and his reaction was noticed by fans.

Despite a tight start to the game, Nicolo Zaniolo put Roma ahead after 32 minutes, and in doing so scored the first ever goal in the European Conference League final. But despite Mourinho being desperate to win the competition at the first time of asking, he told his bench to stay in their seats.

Zaniolo beautifully lobbed the opposition goalkeeper, and the Roma bench leapt out of their seats to celebrate. But Mourinho looked furious as he demanded that his players return to the bench and stop celebrating.

Fans were stunned as Mourinho looked as though his side has gone a goal down rather than leading the match, but the Portuguese boss wanted to ensure they remained calm. But that didn't stop fans reacting to Mourinho's 'misery' during the Conference League final.

One fan wrote: "I emulate to be as miserable as Mourinho telling his bench to calm down in a final." And another joked as they posted: "Mourinho telling the bench boys to relax."

Another said: "I don’t care Mourinho is still the coolest man in football." One was a little more serious, as they added: "Mourinho immediately calming his players after their goal is partly because he knows he has a group inexperienced at winning trophies so wants calm heads. Doesn't want over excitement or complacency to seep onto pitch. Stay focussed and professional."

Mourinho was in tears as Roma made the final of the first ever Conference League competition, in his first season with the Italian side. They had to settle for sixth in the Serie A though, with Europa League football guaranteed for next season.

The Roma boss will be hoping to get his side into the Champions League in the near future, and he has already won the competition with Inter Milan. Mourinho is known for turning up in big games, and his calm antics have been see before.

Mourinho is known for keeping calm and sticking to a serious game plan to get over the line in big games, but the Roma stars haven't had much of an opportunity to see that recently. But if they are to become winners, they'll need to get on board with his ways.