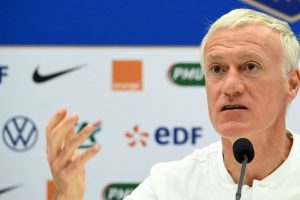 Mourinho believes that France "have to win" the upcoming tournament due to their impressive squad, which features the likes of Kylian Mbappe, Antoine Griezmann and N'Golo Kante.

Les Blues came out on top at the 2018 World Cup in Russia and are widely regarded as the current favourites to go all the way once again.

And Mourinho certainly shares that view ahead of the tournament as he told the Sun: "I cannot see any weakness. If I had to say one team to win it, I will say them – because the group of players is fantastic. They have to win it. If not, it is an unsuccessful Euros."

But Deschamps was quick to play down talk of success being guaranteed for his side as he compared France's Euro chances and Mourinho's underwhelming spell at Spurs.

"I thought the same thing about his Tottenham team, but it did not end up happening like that," he told French television channel TF1.

"Automatically, with the status of world champions, we are favourites, with three more years of experience. I have a very important offensive potential.

"But it's not just that. You talk about balance but I don't disconnect them from our midfield too. We will do everything to have the ball as much as possible but there will be times when we will not have the ball.

Do you think France will win Euro 2020? Comment below.

"It is not a pressure, it is a reality, we will not run away from the debate: France is one of the favourites for this Euro."

France have one of the toughest groups at Euro 2020, competing alongside Portugal, Germany and Hungary.

Karim Benzema will be one of the forwards aiming to fire Les Blues into the latter stages of the competition, having been selected at a major tournament for the first time since the 2014 World Cup.