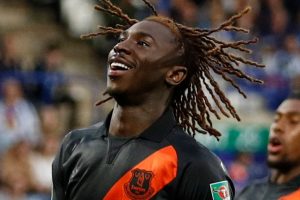 Juventus are close to re-signing Moise Kean on a two-year loan with an obligation to buy the Everton forward for £17m.

Kean is due in Turin in the next 24 hours ahead of being announced as a replacement for Cristiano Ronaldo following his departure and return to Manchester United on Friday.

Italy international Kean joined Everton on a five-year deal from the Serie A club in 2019 for a fee of around £27m.

The 21-year-old scored two goals in 29 appearances during his first campaign at Everton before he spent last season on loan at Paris Saint-Germain where he scored 18 goals in 40 matches in all competitions.

Kean was sent off during Everton’s League Cup win at Huddersfield on Tuesday – his second appearance of the season under Rafael Benitez.

He made his Juventus debut under Massimiliano Allegri in 2016 and is set to work under the Italian once again after he returned to take charge of the club ahead of this season.

Time is running out for clubs to do business – the summer transfer window closes at 11pm in England and midnight in Scotland on Tuesday August 31 and you can follow all the Deadline Day drama with Sky Sports.

Follow all the latest transfer news and rumours in our dedicated Transfer Centre blog on the Sky Sports website and app, check out the latest Done Deals and watch the best analysis and reaction on Sky Sports News.