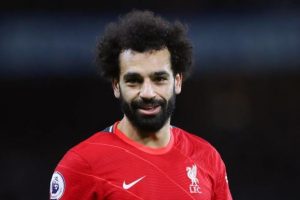 Liverpool have been warned that they need to sort Mohamed Salah’s contract out as soon as possible, otherwise Paris Saint-Germain could swoop to sign their star player. Former Arsenal striker Kevin Campbell believes that by taking their current approach, the Reds are risking “opening the door” for rivals in the transfer market.

Salah is currently under contract until June 2023, but the possibility of a new deal has been on the cards over the past few months.

The 29-year-old is in red-hot form, having scored a remarkable 23 goals in just 26 appearances so far this season.

His form has placed Liverpool under pressure to act, but no agreement on fresh terms has been forthcoming.

According to The Mirror, Salah’s agent, Ramy Abbas Issa, is seeking around £500,000 per week for his client to sign a new contract with Liverpool.

The Reds are reportedly reluctant to shatter their wage structure for the Egyptian, but Campbell believes that time is of the essence.

JUST IN: Arsenal chief Edu must pounce to sign bargain of January window

“Salah could be top of the list [for PSG],” Campbell told Football Insider. “It’s a real possibility.

“The negotiations are taking too long at Liverpool. They are giving other teams an opportunity to zero in on him. They are opening the door. That needs to be sorted out as soon as possible.

“PSG will be interested in somebody who can score the amount Salah does, 100 per cent. Who wouldn’t be?

What Lyon have told Chelsea in Emerson Palmieri recall talks

“PSG are going to need to replace [Kylian] Mbappe’s goals if he is to leave. There are not many in the world who could do that but Salah is certainly one of them.”

Liverpool have been working on tying their star players down to new contracts in recent months.

But Salah and fellow forwards Sadio Mane and Roberto Firmino are all on contracts which expire at the end of June 2023.

PSG have been touted as a possible destination for Salah due to their wealth and the fact that Mbappe is poised to leave for Real Madrid in the summer.

Mbappe is out of contract in July and has so far refused new terms amid concerted interest for Real, who had two transfer offers rejected in the summer window.

Speaking in October, Salah said he would like to spend the rest of his career with Liverpool.

“If you ask me, I would love to stay until the last day of my football career, but I can’t say much about that – it’s not in my hands,” he told Sky Sports.

“It depends on what the club want, not on me. At the moment I can’t see myself ever playing against Liverpool. That would make me sad.

“It’s hard, I don’t want to talk about it, but it would make me really sad. At the moment I don’t see myself playing against Liverpool but let’s see what will happen in the future.”