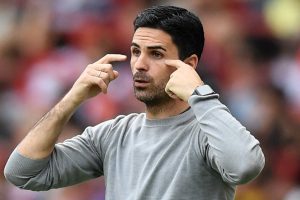 Arteta 'in pain' after Arsenal miss out on Champions League

Mikel Arteta could jeopardise the future of the exciting, young Arsenal team that he’s moulded if the club decide to cash in on a key performer like Gabriel Magalhaes this summer. Jamie Carragher previously outlined that the “togetherness” that was seen in the Arsenal team this season is something that has been missing from the Emirates in previous years – and that could be shattered if the Gunners lose some big names after missing out on the Champions League.

Speaking back in October 2021, Carragher predicted that the Gunners’ young team – who had made a horrific start to the season – had the makes of something special. He told Sky Sports: “When you look at Arsenal now, and the players that they’ve brought in, [it’s] a lot of young players, a lot of energy in the team. I know it’s hard for Arsenal fans because they want to see more from the team, they’re in the bottom half of the table. That’s not good enough. But with a young team you’re going to have to put up with sometimes nights like this.

“It’s never going to be consistent, not as young players individually, as a group. I think all the players they brought in (this summer) were under 23. At times you’re going to have maybe a run of two or three games where it goes well, and then it drops off for a bit. That’s an inconsistency with young players.

“But I do feel there is something to build on with them there, in terms of the young players they brought in, the energy they showed in the first 20 minutes really impressed me, and also these scenes at the end when they got the equalising goal. It just felt like something I hadn’t seen in Arsenal in the last four or five years. It does feel like there’s something, a togetherness.”

Ultimately, Carragher was proved right, as Arsenal went on a terrific run of form to come up just short of the top-four. At the heart of their revival was Gabriel, who has evolved into a leader for the Londoners over the past two years since his arrival from Lille.

Although Gabriel is not one of the multiple new recruits who Carragher was alluding to, the partnership that the 24-year-old Brazilian has struck up with Arsenal new boy, Ben White, formed the foundations for the Gunners to mount their top-four challenge. Gabriel’s age also means that – just like the core of the current squad – his best years still lie ahead of him.

But unfortunately for Arsenal, Gabriel’s impressive form has not gone unnoticed; Juventus have emerged as contenders to prise the ex-Lille star away from north London in a surprise £50million deal this week.

There is no question that Arsenal would be significantly weaker if they do decide to allow Gabriel to depart, and if the Gunners are serious about going one better next year, then they have to bolster their defence, not weaken it. Gabriel and White may have struck up an effective partnership but Arteta lacks quality options in reserve. Rob Holding let the Gunners down in the catastrophic north London derby defeat against Tottenham while William Saliba’s future remains unclear.

Although Arsenal are still licking their wounds after blowing the chance to end their multi-year exile from the Champions League, it’s worth bearing in mind how far the Gunners have come thanks to their with their exciting young squad.

Gabriel has proven over the past 12 months that he is an integral part of that core – and Arsenal must do everything in their power to keep the defender out of the clutches of Juventus if they are to keep Arteta’s ambitious rebuilding project rolling.