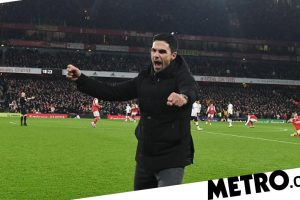 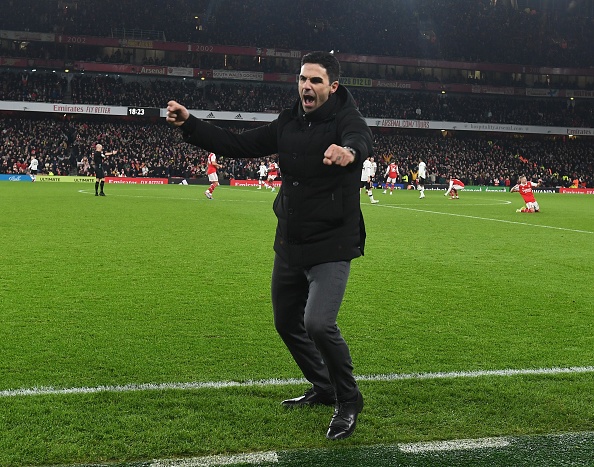 The Gunners beat United 3-2 on Sunday thanks to Eddie Nketiah’s 90th-minute winner – a result which sees them open up a five-point gap over second-placed Manchester City with a game in hand.

Arsenal have made just one signing in the January transfer window so far, bringing in Brighton’s versatile attacker Trossard in a £27m deal – who came off the bench against United and played the last eight minutes of normal time.

The north London club are also expected to soon announce a deal for Polish defender Kiwior from Italian side Spezia.

Arteta all-but confirmed the transfer when he was quizzed about the player watching on from the stands – with Geoff Shreeves asking how important January signings had been – and Arteta confirming that ‘they are going to help us’.

‘Just in terms of numbers, we had 15 or 16 outfield players [before signing Trossard and Kiwior] and it wasn’t enough,’ the Spaniard told Sky Sports.

‘They are going to help us. You saw Trossard is composed and confident already.’

‘But there are a lot of things that we can do much better.’

Arteta then spoke to BBC Sport about Nketiah’s winner – delayed by a VAR check – and added: ‘I wasn’t sure; they were looking at something we hadn’t seen and we very relieved. We got to celebrate twice.

NKETIAH IS THE MAN OF THE MOMENT! ð¥

‘We showed a lot of emotional control – being 1-0 down to Manchester United is very tricky.

‘They will kill you in big distances but we came back into the game. We stayed focused and I love this personality the players showed. We found the opening to win the game.

‘They do surprise me with how they react. We encourage them to play free-flowing football and there is energy in the team and good things happen.

‘To do it repeatedly against big teams, the way we played today, gives me a lot of positivity for the future. It is so tight now in the league, there are such small margins.

‘Winning, losing or drawing, you have to be be conscious of that. If we can capitalise on the energy, it will be positive.’