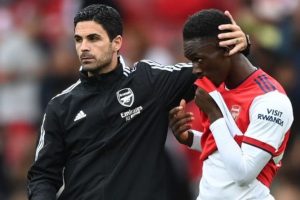 Mikel Arteta insisted he saw “positives” in the relationship between his Arsenal players and the Emirates crowd although they were booed off after beating beaten by Chelsea on Sunday evening.

The Gunners fell to a 2-0 defeat in north London after Romelu Lukaku scored his first ever Chelsea goal on his second debut for the club and Reece James netted a fine first-half effort.

Arsenal have now suffered back-to-back defeats to start the new Premier League season and Arsenal supporters made their discontent known at the final whistle as some booed their side’s performance.

But speaking to Sky Sports post-match, Arteta insisted he was pleased with how the fans greeted his players throughout the match, which was the first in a full-capacity Emirates for nearly 18 months.

Arteta admitted of the victorious Chelsea: “When they play at their best, which I think they did today, that’s why they are champions of the Champions League.

“When they have everybody on the pitch they have world-class players and world-class organisation. They demand so much over 90 minutes so to match at that level at the moment is difficult.

“You can always do things better in a football match. Certainly when you lose a match, you find things you should’ve done in a different way.

“In the first half we had some difficulties. It took us a long time to regain the ball in the right areas. When we did it and we looked a threat, we didn’t finish enough actions with the quality that we need to.

“We conceded the goals but the way the team responded and the crowd really helped, they never gave up, it gave us hope in the second half but we needed a goal and we didn’t score it.”

Asked about the smattering of boos from the crowd at the end, Arteta added: “I see a lot of positives with the crowd and the team today. Yes I did. The way they supported the team right from the beginning.

MUST READ: Chelsea’s Reece James was ‘worried he broke a tooth’ after nasty clash

“At the end I didn’t see any bad reaction with any of the players. When players were getting subbed I saw a good reaction. It is my opinion.

“It is one of the difficult moments that you have to go through. The circumstances are really difficult and probably unprecedented. You have to face them. Feeling sorry for yourself doesn’t help.

“You have to face the challenge and the criticism. It’s going to come, we’re Arsenal Football Club, you have to win every football match.

“We need to keep the togetherness and the spirit the team showed in the second half even losing 2-0 and knowing it’s really difficult in this moment to beat a team like them. We never gave up.

“We need to firstly keep the team together and starting tomorrow in training with the players that did not play. We have a game midweek [against West Brom in the Carabao Cup], win that one and that will help us prepare the game against Manchester City.”

Arsenal legend Sol Campbell felt his former side simply afforded goalscorer Lukaku too much space throughout the 90 minutes.

“I think you have to hand it to Chelsea, the quality is there, they have a good balance of experience and quality, everyone can see that,” the former Invincibles centre-half said on Sky Sports.

“But Arsenal did allow Lukaku far too much time on the ball and far too much space for him to receive the ball in the air or on the ground.

“The two midfielders, especially Jorginho and [Mateo] Kovacic, had too much time on the ball to dictate the play.

“But in the second half, we were in their faces, pushing in and we made it difficult for them. But still, Chelsea have another couple of gears to go.”

While co-commentator and Manchester United hero Gary Neville weighed in: “Lukaku has given the complete centre-forward display. He has been the difference between the two teams.

“Arsenal have stuck at it but they have been nowhere near Chelsea. Mikel Arteta just has to get to the international break and hope that all the Covid issues Arsenal have had go away and he can get his squad together.”

Arsenal were without Ben White and Alexandre Lacazette due to bouts of Covid while Pierre-Emerick Aubameyang was only able to come off the bench having also suffered from coronavirus recently.

Thomas Partey and Gabriel Magalhaes were both out injured while worryingly Kieran Tierney was forced off against Chelsea with a knock in the second half.

Arsenal take on reigning champions City in their next match at the Etihad next Saturday.