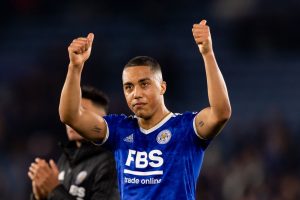 Mikel Arteta has made £40million-rated Youri Tielemans his top target as Arsenal reportedly close in on a deal for the Leicester City midfielder.

The Belgian midfielder has been a long-time target for the Gunners and could be on his way to the Emirates Stadium in the summer as long as they qualify for the Champions League. The Sun report that Real Madrid could look to hijack the move if Arteta's side miss out on a top four finish this season.

Tielemans is out of contract at the end of next season and the Foxes are believed to be willing to sell for around £40million.

Arteta is keen to boost both the quality and depth in his midfield and has identified Tielemans as the man to do so, with Granit Xhaka's future still uncertain and Mohamed Elneny out of contract at the end of this season.

Leicester would be at risk of losing Tielemans for free next summer if they do not let him go this year, with the 25-year-old having turned down several offers of a new deal.

He is understood to be keen to play in the Champions League, which Arsenal are currently on course to offer for the first time since 2016/17.

Will Arsenal qualify for the Champions League this season? Let us know in the comments section below.

Tielemans joined Leicester from Monaco for £40.5million back in 2019 following a successful loan spell at the King Power Stadium. He has gone on to score 24 goals in 154 appearances, including the winner in last season's FA Cup final.

He has also provided 23 assists, with four of them coming this season along with seven goals in his 46 appearances across all competitions.

Arsenal can secure a top four finish as early as Thursday night if they beat Leeds United on Sunday. A victory over Tottenham Hotspur in the North London Derby in midweek would then leave the Gunners seven points clear of their rivals with just two matches remaining.

The Gunners have been absent from Europe's premier continental competition since 2017 and missed out on European football all together last season for the first time since 1995/96.