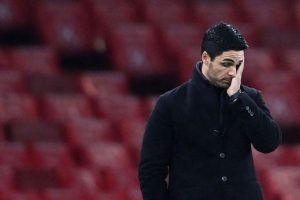 Mikel Arteta admitted he was "gutted" as he provided an update on a suspected ankle injury sustained by Arsenal forward Gabriel Martinelli.

The 19-year-old appeared to twist his foot awkwardly during the warm-up for Saturday evening's FA Cup third-round tie versus Newcastle.

Martinelli received treatment on the pitch and was promptly removed from the starting XI, with Reiss Nelson chosen to replace him.

The Brazilian only returned from a six-month lay-off with a knee injury in December and there are fears he may be facing another spell on the sidelines – with Arteta confessing the youngster was "in tears" following the incident.

"I am gutted," said the Arsenal boss. "I was in my office before the game and one of the medical staff came in and said he twisted his ankle. He was in tears and in a lot of pain.

"We're going to see how he is but he didn't look good. He was in pain. He's a character that he wants to play the next game, hopefully it's not too serious."

Arsenal are awaiting an update on the full extent of the potential injury suffered by Martinelli, who has made five appearances this season.

Earlier this week, the player spoke of how Arteta helped him recover from the serious knee injury he suffered during training last June.

“Mikel talked to me during my recovery,” he told the Daily Mail . “Always calling me to know how I was, even when I returned to Brazil for a time in August.

"When the club needed me, he talked to me again, asking if I was feeling ready to play.

“I said yes. I still feel a bit of pain in the knee, but the doctors say that it is fine. I've not been able to play 90 minutes yet, but it also needs time. My focus is on getting better and helping Arsenal.”

Martinelli scored 10 goals as he burst onto the scene in the 2019/20 campaign, while he has one assist to his name this season.