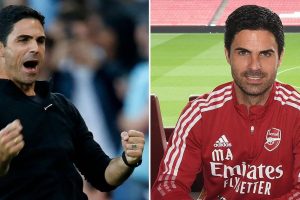 Mikel Arteta insists Arsenal legends are always welcome at the club – as long as they do not spread ‘poison’.

The Spaniard’s blunt message comes after he put pen to paper on a new three-year deal at the Emirates last week.

And although he did not name names, it was almost certainly directed at ex-Gunners hitmen Thierry Henry and Dennis Bergkamp.

The pair were openly critical of the Arsenal board and manager earlier this season and also publicly supported a rejected £2billion takeover bid from Spotify supremo Daniel Ek.

Ahead of the visit of relegation-battlers Leeds, the Emirates boss was asked if his contract extension until June 2025 proves the outside snipers, that he felt were deliberately undermining his reign, have been silenced.

Arteta, at the helm since December 2019, declared: “There are many, many more positives than negatives.

“I always said we have a great example with our ex-players. And what happened a few weeks ago at the Emirates, it was emotional, natural and organic.

“Now, hopefully, they have realised that anyone who wants to contribute to what we’re doing, genuinely contribute, with advice or support, he’s more than welcome.

“And anyone that wants to poison the club…he’s going to be very far away from the club.”

Utilising the wisdom and knowledge of those who were such a major part of Arsenal’s glorious, glittering past makes perfect sense, according to Arteta.

Indeed, he reckons the club’s rich history can give his young, blossoming outfit, who started the weekend two points clear of Tottenham in the race for fourth place, a significant edge moving forward.

“With the history that we have, if we don’t use it, we are losing a big percentage and margin in relation to other teams,” explained the ex-Everton, Rangers and Arsenal midfielder, 40.

“We have that because there’s been so much success and so many incredible people and players in this club’s history.

“We have to encourage that to come back to the club to make us strong. That’s my aim.”

No question that with Thursday’s crunch derby at Spurs looming large, Saka and Co could get some decent tips from Henry and Bergkamp about how to triumph in N17.

They were key components of Arsene Wenger’s Invincibles that clinched the 2004 league title at White Hart Lane – just as Arsenal’s first Double winning side did back in 1971.

So what chance of the class of 2022 writing their own history and securing Champions League qualification – for the first time in five years – at the expense of their fiercest rivals?

Optimistic Arteta said: “It’s phenomenal, all those experiences, how they won it. How they were invincible. For this generation, it would be something incredible and, hopefully, we can do it naturally and with everybody feeling in the right place.”

And Arteta admitted: “It’s going to be really tough. The players know what to expect on Sunday.”