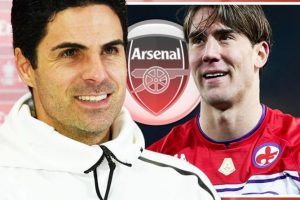 Arsenal boss Mikel Arteta has hinted the club are ready to make a move for Fiorentina striker Dusan Vlahovic. Arsenal are reportedly leading the way in the race to sign Vlahovic if he were to leave Fiorentina this month. And Arteta has not ruled out major signings in this window.

Vlahovic has scored 16 goals in 19 Serie A appearances so far this season to back up his fine campaign in front of goal last term.

The Serbia star equalled Cristiano Ronaldo’s Italian top-flight record of 33 goals in a calendar year in 2021.

Arsenal will soon be in need of at least one striker, with Alexandre Lacazette, Pierre-Emerick Aubameyang and Eddie Nketiah all seeing their futures at the Emirates in doubt.

The Athletic reports Arsenal are pushing to sign Vlahovic in this window, not the summer.

Arteta hinted that is the case at his press conference on Friday.

The Spaniard said the club are not against making January signings if the right opportunity becomes available.

“We have to maximise every window in many different ways and we are alert,” Arteta said.

“If it is the right player and we can afford it and we can do what we want to do we will discuss it and make the best possible decision. We are open.”

And Arteta admitted he is looking to recruit in that area.

“We are very, very short at the moment,” he said.

Arsenal take on Nottingham Forest in the third round of the FA Cup on Sunday.

The Gunners lost 4-2 at the City Ground at this stage of the competition four years ago.

Arteta is set to return to the dugout after missing last week’s defeat to Manchester City following a positive Covid test.

He admitted he has a depleted squad to choose from but still wants the game to go ahead.

“We want to play and that is how we are approaching every game,” Arteta said.

“We are really short with numbers, really, really short. We have some issues, but we will know more tomorrow.

“We want to do everything to play the game and don’t expect anything different than to play on Sunday.