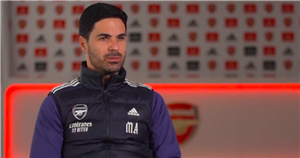 Arsenal manager Mikel Arteta has revealed the "kind" offer given to him by Unai Emery before he took over from him at the club.

Emery, who is now in charge at Villarreal, was sacked by the Gunners in 2019 and was quickly replaced by Arteta.

The ex-Arsenal boss had had a series of poor results and a seven-game losing streak before being given the boot.

The two managers go head-to-head on Thursday night for the first time in their Europa League semi-final.

While the pair won't be comparing notes on the match, Emery did share words of wisdom with Arteta before he joined the Gunners.

Arteta said: "I spoke to him before I took over at the club and he was really helpful. He offered me that opportunity which is sometimes unusual. He was very sincere and open. I was very grateful for that.

"He is a very experienced and successful manager – in the Europa League in particular with what he has done. So there is no doubt that he has the tools and knowledge to manage at the top level.

"That relationship [between Emery and Arsenal] existed and we cannot go against it. Unai knows the club really, really well and we know Unai as well and what he did before he joined here and what he did at the football club and that’s it."

Arteta has even more pressure on him to win the two-legged tie after Arsenal lost 1-0 to Everton at the weekend to continue their poor Premier League campaign.

However, if the London side can win the Europa League they will play in the Champions League next season.

Arsenal's hopes have been boosted with three stars returning to team selection.

Arteta confirmed Pierre-Emerick Aubameyang, Kieran Tierney and Alexandre Lacazette could all be fit for the last four clash.

Villarreal, meanwhile, will be aiming to secure their first ever Europa League final spot.