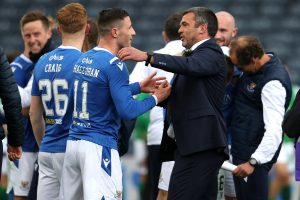 O’Halloran had a decision to make after coming to the end of his contract.

But the 30-year-old has now decided to stay put in Perth with Callum Davidson’s team after last season’s dream Scottish Cup and League Cup double triumph.

He told the club’s website: “I’m delighted to have my future sorted out.

“I was out of contract at the end of the season and had other options to consider.

“But my focus was very much on trying to come to an agreement with St Johnstone.

“I’d like to thank the manager, the chairman, the board and (head of football operations) Scott Boyd for making the process straightforward and making me feel wanted for the next couple of years.

“We have just completed the most successful season in the club’s history and I’m very proud to have played my part in what we achieved. I wanted to be here for the next stage.

“We are going into European football and we have really exciting times ahead.

“The dressing room is a great place, the boys are all brilliant and the togetherness is second to none.

“We all enjoy coming into work and working with the manager and the coaching staff.

“I think we can see that with the number of players who have also renewed their contracts. Saints is a brilliant place to be.”